2016 draft report explains what happens if Tarleton goes Division I

A 2016 draft report on the pros and cons of Tarleton moving from NCAA Division II to Division I says the move would “provide significant opportunities for increased revenue and marketing dollars” but also require “a significant financial investment in athletics.”

A copy of the Jan. 13, 2016 Division I Transition Plan – stamped “DRAFT” and which has not been publicly released – was given to Texan News by a person who asked not to be identified. 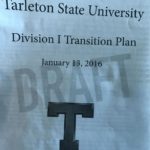 The draft was given to Texan News by someone who wished to remain anonymous. Photo by Arynn Tomson.

The draft also states that student-athletes will be put on a mandatory four-year moratorium on postseason play for all sports, which would mean that the students would not be able to participate in conferences or national championships for four years after the university reclassifies to Division I. “We can’t please everyone,” Reisman says. Not every student-athlete will be happy with the moratorium, but he thinks that the majority of the students will be thrilled to be “well-known” and “on the same level as Baylor.”

According to the plan, reclassifying to Division I aligns well with the direction the University is taking in the future. The draft states that transitioning to Division I will be “historical and would be one of the biggest decisions/moments in the history of Tarleton State University.”

Reclassifying to Division I, the plan says it “provides increased exposure from a marketing and branding perspective” and “will provide significant opportunities for increased revenue and marketing dollars.”

Although there is some speculation that Division I is only awarded by the size of the school, this is not the case, says Michael Landis, an assistant professor of history and a member of the faculty senate at Tarleton. Landis says he also taught at a Division I university.

“I spent one year as a visiting assistant professor of history at Sacred Hearts University, a small catholic school in Connecticut. It was smaller than Tarleton, but being Division I isn’t about the size of the school; it’s about the types of facilities you have. It’s about the number and amount of scholarships you have for your athletes and there are a couple of other components as well,” Landis said.