Standing at 6 feet and 6 inches tall, Davene Carter was a giant of an athlete at Tarleton State University. After graduating from Tarleton in 2015, Carter became a Harlem Globetrotter and is now looking forward to starring in TNT’s new sports reality TV show, “The Dunk King.”

In February, tarletonsports.com reported that Carter will star in the TNT show’s second season. Dunkers showcase their talents in a competition that awards the winner $100,000. Carter said that a recruiter for “The Dunk King” called and asked him to try out for the show. He said he wasn’t interested at first, but after some convincing by the recruiter, he decided to try out. 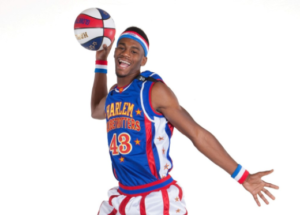 Carter joined the Harlem Globetrotters in 2015. Photo courtesy of tarletonsports.com.

“I had to send a video in with my dunks and stuff like that and they also do an interview with you to talk to you and see what your story is, what type of person you are,” Carter said in an interview with Texan News. “Same thing with the Globetrotters— they just wanted good people on the show, (who) were good guys on and off the court and I fit that description. They loved my story and they ended up flying me out for the show.”

Carter said he “cannot wait” for the premiere of “The Dunk King,” which will air after the NBA Eastern Conference Finals in May.

A graduate of Duncanville High School, Carter attended Tarleton from 2011 to 2015 on a basketball and track scholarship.

He excelled in both sports while majoring in kinesiology. He was a high jumper in track and went to nationals his sophomore and senior year. His highest jump was 7.25 feet. He went on vertical jump training to improve his dunking and high jumping ability.

As an athlete, Carter particularly stood out in basketball. During his years as a Texan basketball player, Carter and his team made it to the NCAA Division ll Elite Eight tournament after defeating Angelo State University in a regional tournament.

“It’s always been a goal of mine to put one of those white banners up. You get a white banner for the Elite Eight and also a Final Four. We beat Angelo to make it to the Elite Eight, so that was our white banner,” Carter explained. “That game was crazy. The gym was packed. It came down to a buzzer beater, they missed, and we just went crazy.

“It was just an amazing feeling to accomplish something like that because it just hasn’t been done in so long,” he added. “That was just a crazy feeling to just be a big part of that game and to just work hard for four years and to see stuff start to pay off, finally.”

Carter didn’t win the slam dunk contest, but finished in third place. However, he considers this one of his favorite memories because of the support he received from the community.

“They put up ads, they had flyers, posters and everything all over the place telling people to go vote,” Carter said. “They just wanted to see Tarleton put up on a bigger stage… Then, I got to be on ESPN in front of billions wearing my Tarleton stuff and I was just happy to represent, basically.”

Soon after that slam dunk contest, the Harlem Globetrotters contacted Carter. He said the organization contacted his coaches through phone and email, wanting to know what kind of person Carter was both on and off the court.

He recalled being told, “You’re always on the job. As long as you got that Globetrotter stuff on, you’re always in the spotlight. You’re always being held to a higher standard because you’re a Globetrotter and you have a name and a brand to represent.”

Carter was a Globetrotter for a year, but said he left because he is still seeking to pursue a career in professional basketball. Although he is no longer a Harlem Globetrotter, Carter said he is grateful for the experience.

“I always watched them when I was little,” he said. “I’ve seen them on ‘Scooby Doo’, the commercials they did, and stuff like that… Just to be a part of that was surreal. I really got to travel the world and I really got to go places I would’ve never gone if I wasn’t with the Globetrotters.”

Carter said he’s enjoyed dunking since he was a child.

“I would be on the little tyke goals, (I would) dunk that. I’d get too big for it, then we got a big goal. (I) couldn’t dunk it yet, so we lowered the goal as much as we could,” he recalled. “We put rocks under it to tilt it so we could dunk on it. I’ve always wanted to dunk and I’ve always watched dunking and stuff like that. It’s just something I’ve always wanted to do.”

When he was finally able to dunk his sophomore year at South Oak Cliff High School, his coach encouraged him to dunk as much as he could.

“Once I was able to do it, my coach told me (with) my ability, there is no such thing as a lay-up, so any chance I had to dunk, it was a dunk,” Carter said. “No layups, everything is a dunk.” 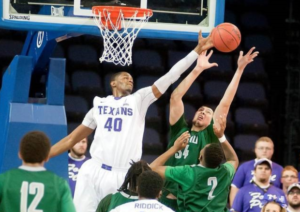 Carter played basketball for Tarleton from 2011 to 2015. Photo courtesy of startelegram.com

Carter said his family inspired him to be the best he can be.

During his younger years, Carter constantly moved to new areas that had environments he describes as “tough.”

Carter added that he had to grow up fast. He was raised by a single mother and would often have to take care of his younger brothers while she was at work, all while managing other responsibilities that most teenagers have, such as homework. “So, I had to grow up at a young age, that’s what made me as strong as I am today,” Carter said.

He added he wants to make sure all of his mother’s hard work doesn’t go to waste and wants to continue to be a good example for his younger siblings.

Carter’s dream job is to play for the Dallas Mavericks. He said he has loved the Mavericks since he moved to Dallas.

“If not that, play in the NBA. If not that, play overseas and make millions,” he said. “I just want to be well off to where I don’t have to worry about working anymore, (and) I could help my family out.” Carter added he wants to be able to “help lift everybody else up.”

His advice to younger athletes is to not become arrogant or self-centered, but to work hard while staying humble.

“It’s not about you,” said Carter. “Find a reason to hoop. Find a reason to go hard every day. Find that motivation that you need. Either your mother, your parent, your father, grandparents, people that have passed. Whatever pushes you to be better, use that and be the best you can be.”

“No matter where you come from, what trials and tribulations you’ve been through in life, you can always push through,” he concluded. “You can always overcome and you can be whatever you want to be in life.”