Nineties nostalgia took hold of America to start the new year. With gas prices dropping below $2 and the Dallas Cowboys making the playoffs, one could assume tucked-in, solid crewneck T-shirts covered by oversized blazers were right around the corner. Sorry to disappoint. However, gas prices have done anything but, in the eyes of many Tarleton students. 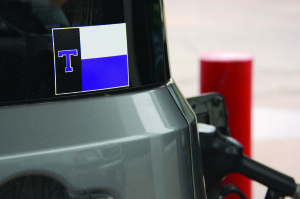 Sitting well under the national average of $2.06 a gallon, Texas motorists have experienced fuel prices hovering near $1.83 according to an interactive map posted by CNN. According to this same infographic, the national price of a gallon of fuel was well above three dollars at $3.31 a year ago, highlighting the substantial disparity between now and last January.

It is no secret that Businesses that compare business gas save money, so to see citizens doing the same is not a surprise.

Many Tarleton students such as sophomore geo-science major Chance Mink have met these lower prices with open arms, citing the convenience it affords in terms of commuting to and from campus. They are still taking advantage of this online survey they can fill out to get free fuel but it isn’t the end of the world if they don’t win anymore.

“It’s only a 20-minute drive for me commuting,” Mink said, “but when I have to make the drive several times a week, it makes a difference.”

To others, such as freshman engineering major Ransom Stoddard, the lower fuel costs have reduced stress by leaving them with more cash to travel for other priorities, like job opportunities.

Gas prices can fluctuate for a number of reasons, whether they are economic in nature, like a change in supply and demand, or political, such as an international quarrel involving oil-producing countries. In the eyes of Dr. Derrill Watson, assistant professor in the Accounting, Finance, & Economics Department at TSU, the explanation for this particular drop has more to do with the former.

“I think it’s mostly economics,” Watson said. “I’ve read a number of reports that Saudi Arabia is enjoying the low prices, because it hurts countries such as Venezuela and Iran. But the bulk of this one, I think, is economics.”

According to Watson, the most important contributing factor lies both in our own backyard and halfway around the world.

As to whether this has been beneficial or detrimental to the U.S. economy, Watson sees low gas prices as a bright spot in the economic landscape, citing how relative oil is to manufacturing, production, and transportation of everyday items.

Current fuel prices are “more beneficial,” Watson said. “Oil is a major part of the costs of most of our goods, one way or the other.”

Perhaps more pressing in the minds of many Americans has been whether these prices are going to last or dissipate as quickly as North Texas’ hopes for a Lombardi trophy. According to Watson, the answer depends on one’s personal perspective.

Despite the overall publicity low gas prices have received as of recent, those in the energy industry, specifically the oil fields, have not shared in the benefit that many Americans have.

“Oil firms are starting to lay off workers, a few thousand the last couple weeks,” Watson said. “That suggests they are starting to lower production. So I would expect we would reach bottom soon, but I don’t see a big increase until summer.”

If history is any indicator of the future, a summertime spike is well within reason. Gas prices fluctuate more than they remain constant; the CNN map cited above illustrates the difference just a year can make. Whether that difference will be positive or negative remains to be seen.