Last night’s Gay Straight Alliance (GSA) meeting was filled with laughter and comments like “don’t feed the trolls” after a white nationalist account tweeted about burning flyers for the meeting. 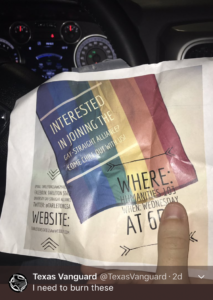 James Dinh, a professional counselor at Tarleton who led the dialogue said that the post has been reported. Photo courtesy of the Texas Vanguard Twitter.

The Twitter account posted a picture of a flyer for Wednesday night’s GSA meeting with the caption reading, “I need to burn these.” That tweet was in response to a video of an unidentified Vanguard America member burning a flyer that read, “Good Night Alt-Right.”

That account was Texas Vanguard, a branch of the Vanguard America white nationalist organization who first put flyers on the Tarleton State University campus in March.

At last night’s meeting, one of the topics of discussion was how to deal with hate. James Dinh, a professional counselor at Tarleton led the discussion. Dinh began by asking, “What do we do when we encounter this? And, what do we do when it’s not something that we can just ignore or block on social media?” 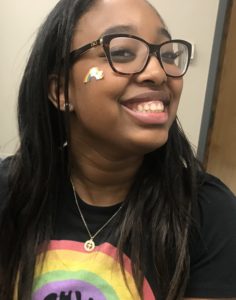 On the topic of anti-LGBTQ comments in classroom settings, Diamond Beverly, the president of GSA, said that although speaking up is important, sometimes a person needs to remove themselves from the situation. Photo by Quanecia Fraser, Texan News.

Dante Hoelting, GSA’s Vice President had some advice for his fellow members.

“If you choose to battle, battle wisely and battle intelligently. Sometimes you just need to tell them to shut up—that works with some people. Other times, you have to seem [like] or be the more intelligent person in the room to sway the audience… you know what is right, not everyone in the room does,” he said. “So, the goal shouldn’t be just to convince that person, it should be to convince the audience at large.”

Another person responded to the tweet about the GSA meeting with “Burn it. But leave it on the wall (fire emoji)”. Dinh said they did find this tweet to be threatening, and added that it was reported along with the picture that was captioned “I need to burn these.”

However, Dinh says that they think the anti-LGBTQ tweets actually unified the members of GSA. “Instead, it led to this (the meeting’s) awesome conversation… We are capable of transforming things— that may have been intended to discourage us—into something else.” 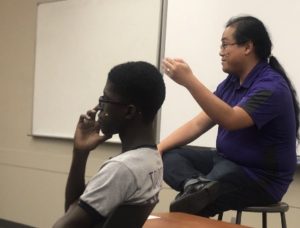 Hoelting also spoke with Texan News after the Wednesday night meeting. He mentioned that he was the one who suggested that they have a dialogue about hate speech. Hoelting explained that he didn’t want GSA to respond dramatically or angrily, since that is the kind of reaction Texas Vanguard may have wanted to see.

“But, I do feel that it is nice to have a conversation because I want to know what they (GSA members) think,” said Hoelting.

Hoelting says the tweet did not scare him. “They can’t do anything on campus more than promote fear and propaganda, that’s their weapon. So, if we feed into what they want by acting irrationally… they win. We can’t give that to them. The best thing we can do is keep on being ourselves because that’s what irked and irritated them in the first place.”

He added, “I’ve never been the kind of person to change who I am in response to anything like that, so why would I stop now? Especially, when I’m leading or helping them (other GSA leaders) lead an organization.”