Rebecca Hernandez and Sydney Burns contributed to this report.

In the last 20 years, the number of minority students at Tarleton State University grew from 7 percent to 30 percent, according to data in an email that asked marketing employees to “portray white males in our promotional materials because of the huge decline in their enrollment.”

Male students at Tarleton comprised the largest demographic on campus until 1989, and since then, male enrollment has declined from 48.9 percent to 38.6 percent.

Those two trends are at the center of the controversy about the email from Harry Battson, assistant vice president for marketing and communication, which asked his staff to include white males in marketing materials.

The full text of the email reads: 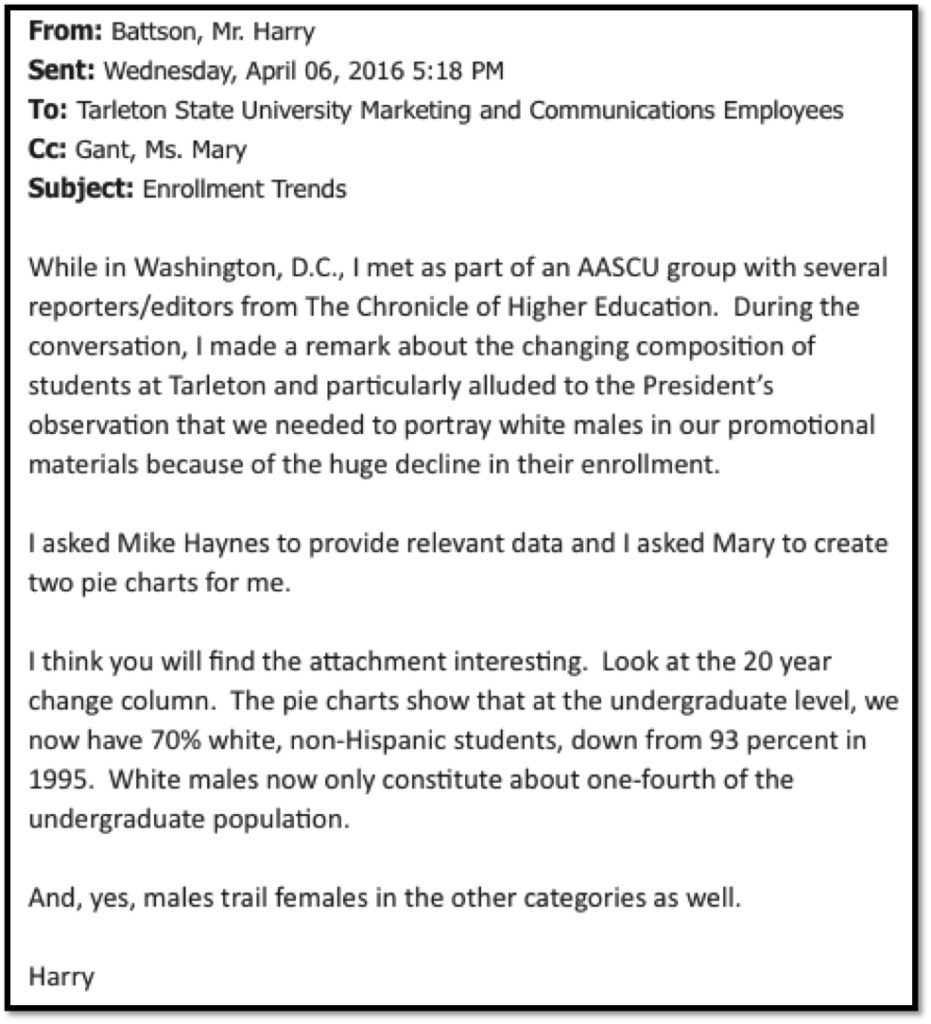 “This is not directed from the president of this university to look for white males. That was a mistake, an unfortunate error, an interpretation that should have never been placed in an email the way it was,” said McGregor. 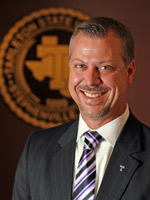 McGregor said when he met with President Dominic Dottavio, “We talked about the ‘missing male,’ and primarily we believe that, that phenomena was happening here, which it is.”

Assistant Vice President for Marketing and Communications Harry Battson, the author of the email. Photo courtesy of Tarleton.edu

Research shows the phenomena of the “missing male” has occurred at colleges across the nation. Males made up the majority of students in colleges through the 1960s. But studies show in the 1970s and 1980s male enrollment became stagnant and then started to decline.

As decades passed, the “missing male” became more prominent, while the enrollment of females seemed to grow rapidly, surpassing males.

In a 2015 Forbes magazine article titled “The Disappearing College Male,” the author described the issue this way: “For every four women graduating from four year colleges, there are only three men.” http://www.forbes.com/sites/ccap/2015/05/04/the-disappearing-college-male/#7b03019e50f0

A set of data attached to Battson’s email shows Tarleton’s undergraduate enrollment rates broken down by gender and race from 1995 to 2015.

The data show that in 1995 a total of 2,433 white males, 98 African American males and 130 Hispanic males were enrolled at Tarleton.

Data from 2015 show there were 2,868 white males, 323 African American males and 709 Hispanic males enrolled at Tarleton.

According to the data, in the 20-year period, the white male population had the smallest growth rate. White male enrollment, for example, grew by 18 percent compared to African American males at 230 percent and Hispanic males at 445 percent.

Even though the enrollment of white males has increased at the slowest rate over time, they still remain the second largest group. In the 20-year period, the male population has remained under 50 percent and has continued to decrease between two to three percent every five years according to the data in Batton’s email.

Texan News Service compared enrollment trends at Tarleton with 10 other schools around the state, some included in the Texas A&M System and others of similar or larger size. Out of these 10 Texas universities, Stephen F. Austin University was the only university with an actual decrease in males.

Battson said he relayed Tarleton’s enrollment trends to his marketing team, telling his staff to include white males in promotional material. Battson said that in previous marketing materials, they have “highlighted everyone except white males.”

“You have women. You have people with disabilities. You have people of different cultural or races. We’re always scanning for those. The one we don’t scan for is the white male, because the assumption is the white male is out there,” said Battson. “This is simply making my staff aware that when we talk about every group, look at the data. We need to make sure that we are showing white males a model, you know as a perspective student, that they can come in here to be part of their group as well.”

Texan News Service emailed Tarleton’s Public Relations Manager Cecilia Jacobs for a statement from Dottavio about Battson’s email. In the interview with Battson and McGregor, Texan News Service received the president’s statement. According to the president’s statement, “The conversation in question was about the “Missing Males” from college campuses across the nation. The focus within Marketing and Communications on white males grew from that and was erroneously attributed to the President.”

The email became public after a student who received it, Renee Warner, shared it with Texan News Service. Battson’s email was addressed to Tarleton’s marketing and communications employees, which at the time included Warner. 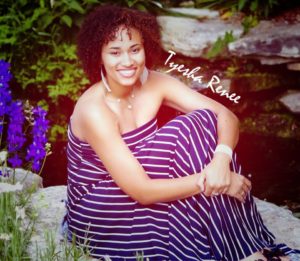 Renee Warner, junior and broadcast and journalism major, came across the email while working at Web Services.
Photo courtesy of Facebook.

Warner said she spoke to Executive Director of Student Engagement Darrell Brown and then to Vice President for Student Life Laura Boren. Warner said she expressed her concern about having to put aside her passion for promoting diversity.

In an email to Texan News Service, Brown said his response “to the reading of the email was that of surprise. Secondly, I advised Ms. Warner to visit with Dr. Boren before taking her concern any further.”

Boren said in an email to Texan News Service that she met with Warner “regarding her experiences at Tarleton as a minority student. I asked her to help me connect to other minority students who would be willing to share their personal experiences so that I can better understand the university atmosphere. My intent is to foster a high trust environment that enables students to learn and grow from each other.”

Boren encouraged Warner to create a student board to advise the university on diversity issues.

The same day, Warner said she was asked by Boren to meet with Dottavio.

“When I was in there, you could tell he (Dottavio) felt uncomfortable,” said Warner. “He said he was having a conversation about the decline in the male population in universities, and he said, ‘I don’t know how Harry misinterpreted me saying ‘white males.’’”

Warner said the next day she met with Boren and McGregor. Warner said McGregor told her “he felt responsible for all of this, because he’s the one who had the conversation with Dr. Dottavio about the decline in male population.”

When asked if he said this, McGregor said, “I never characterized it that way.”

McGregor said he wasn’t aware of the email until he met with Warner. “I saw the email, I believe the first day we met with the individual who submitted it to Texan News Service. It was that day or the next day,” said McGregor.

McGregor said his reaction to Battson’s email was “shock.”

During the same meeting with Boren, Warner said McGregor offered her a job to work alongside his assistant, Sara Hanson, while Warner tried to find a new job.

However, in the interview with Texan News Service, McGregor said he never offered Warner a job.

“Renee Warner was never offered another job. Now you’re skirting some FERPA (Family Educational Rights and Privacy Act) issues that I don’t feel comfortable talking with you about. This is an individual student who has come to you, and you really have no right to know her personal information from me,” said McGregor.

In a recording Warner made of her conversation with Boren and McGregor, McGregor said, “But for us, we can hire a student worker whenever we want. You’re lucky you get to work with a couple of vice presidents with this… we can make that happen.”

When asked later to reconcile his recollection of the conversation with Warner’s recording, McGregor said he was trying to make sure Warner didn’t wind up unemployed.

“My concern at the time was, if she quits her job, she has no income stream for room and board,” said McGregor.

McGregor said he told Warner, “What we are going to do is we are going to keep you at your current job (at web services), your current Intern 2 Learn (student worker job), and you’re going to come upstairs to my office until things settle down, the semester is over with and Dr. Boren can find you another permanent position in student life or I can find something somewhere in the division.”

Warner said she worked in McGregor’s office for about a week shredding documents and cleaning out an office.

Warner said she feels like the administration is trying to keep her quiet by giving her “special treatment.”

“The treatment I’m getting right now is as if I’m working in the big house,” Warner said in one of several interviews.

Warner said she was given permission to drive the president’s golf cart and a tour of the Trogdon House.

Warner said she was invited by McGregor and his assistant to get coffee with them at the Trogdon House. While they were there, Warner was given a tour of the house.

“Of the three years I’ve been here, that was the first time I was offered a tour inside. After the tour was over, I asked Sara (McGregor’s assistant) if we could leave, because I felt uncomfortable being there under my circumstances,” said Warner.

Since the spring semester has ended, Warner said she has started working at a new job as an office assistant in housing. In the mean time, Warner is in the process of creating her advisory board.

“I am working on putting passionate, like-minded individuals together to work side-by-side with Dr. Boren to make sure that every voice on campus is heard. We will be coming up with ideas to not just make diversity better, but to actively communicate with students of every background to create community amongst all of us,” said Warner.