NEW YORK (AP) — Three Americans won a Nobel Prize on Monday for discovering key genetic “gears” of the body’s 24-hour biological clock, the mechanism best known for causing jet lag when it falls out of sync.

Problems with our body clock have also been linked to such disorders as sleep problems, depression, heart disease, diabetes and obesity. Researchers are now trying to find ways to tinker with the clock to improve human health, the Nobel committee said in Stockholm.

It awarded the $1.1 million (9 million kronor) Nobel Prize in Physiology or Medicine to Jeffrey C. Hall and Michael Rosbash, who worked together at Brandeis University in Massachusetts, and Michael W. Young of Rockefeller University in New York. 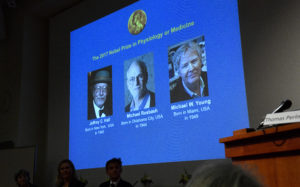 They “were able to peek inside our biological clock” and discover details of its inner workings, the Nobel citation said.

The work, done in fruit flies and dating back to 1984, identified genes and proteins that work together in people and other animals to synchronize internal activities throughout the day and night. Various clocks in the brain and elsewhere in the body, working together, regulate things like sleep patterns, eating habits and the release of hormones and blood pressure. Such 24-hour patterns are called circadian rhythms.

At age 72, the retired Hall wryly noted that he was already awake when the call about the prize came around 5 a.m., because of age-related changes in his own circadian rhythms.

“I said ‘Is this a prank’?” he told The Associated Press by telephone from his home in Cambridge, Maine.

Rosbash, a 73-year-old professor at Brandeis, told the AP that he and his two colleagues worked to understand “the watch … that keeps time in our brains.”

“You recognize circadian rhythms by the fact that you get sleepy at 10 or 11 at night, you wake up automatically at 7 in the morning, you have a dip in your alertness in the midday, maybe at 3 or 4 in the afternoon when you need a cup of coffee, so that is the clock,” he explained. 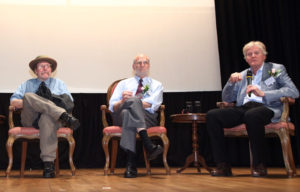 “The fact that you go to the bathroom at a particular time of day, the fact if you travel over multiple time zones your body is screwed up for several days until you readjust — all that is a manifestation of your circadian clock.”

Jay Dunlap, who studies biological clocks in bread mold at Dartmouth College’s medical school, called the Nobel-winning work “beautiful.” It helped expose the molecular details behind daily rhythms, he said. Such knowledge can be important in telling when to deliver drugs for maximum effect, and perhaps for developing new ones, he said.

Michael Hastings, a scientist at the U.K. Medical Research Council, said the field of body clock study “has exploded massively, propelled by the discoveries by these guys.” Nobel committee member Carlos Ibanez said the work helped in understanding how people adapt to shiftwork.

Young, 68, said genes that control our body clock were revealed: “just like puzzle pieces.” The research showed “the way they worked together to provide this beautiful mechanism.”

Hall said that once scientists understand how the clock normally works, “that gives you a chance, not an inevitability, but a chance to influence the internal workings of the clock and possibly to improve a patient’s well-being.”

Rosbash said he thinks most of the practical applications of the work lie in the future.

A genetic mutation has already been found in some people who have a chronic sleeping problem, Young said.

“This gives us a target to work on (and) ways of thinking we didn’t have before,” he said. “I think we’re going to run into this over and over.”

Monday’s award was the first of this year’s Nobel Prizes to be announced. The physics prize will be given Tuesday, followed by the chemistry prize on Wednesday. The prizes were established by the will of Swedish industrialist Alfred Nobel, who died in 1896.

Follow the AP’s coverage on the Nobels here: https://apnews.com/tag/NobelPrizes