Tarleton State University students, their parents and others are trying to determine how a new law permitting people to openly carry handguns will play out on campus.

Some expressed safety concerns. Others raised questions about how the law will be implemented.

“I find myself having mixed emotions about this question,” said James Cook, the parent of a Tarleton student. “On one hand, I do not necessarily believe that many students of college age have the maturity to control their impulses. On the other hand, there have been situations in our country where college campuses have been under attack. Licensed handgun carriers could have possibly stopped some of those attacks.”

In May, the Texas Legislature passed a bill that will allow those with concealed handgun licenses (CHL) to carry firearms on college campuses starting in Aug. 2016. 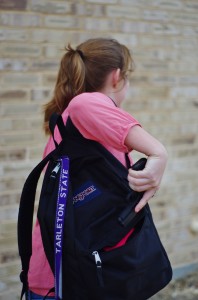 A student who wished to remain anonymous shows a photographer her gun at an off-campus location. “I want the right to protect myself,” she said.
Photo Illustration by Justin Brundin

The bill permits universities to declare certain areas on campus as gun-free zones and to prohibit the carrying of guns in those areas.

No one knows how many people on campus might have permits, but the law’s age restriction-you have to be 21 to obtain a CHL-means that the majority of students won’t be eligible to carry.

“It’s not going to affect the bulk of students living on campus because of their age,” said Tarleton Police Chief Matt Welch.

Welch said campus officials are working with the Texas A&M System’s attorneys to better understand the new law. As of now, the Child Development Center is the only designated gun-free zone on campus. It is still unknown as to whether dorms will be included as gun-free zones.

However, some students and alumna are not thrilled that the bill passed.

“I don’t feel safe about that,” alumna Michelle Dickson said when asked about guns being present in classroom lectures. “It would cause more problems than it would solve. It doesn’t mean the students will use it wisely.”

Tarleton student Taylor Felts finds the thought of guns being on campus “scary” and thinks that courses on how to store guns and keep them safe are required for the students.

“I definitely think that if there is an option for guns to be carried that there should be some kind of university education on gun [safety],” Felts said. “I do not think that college kids are very informed on gun safety.”

Welch also said armed students need to be aware of how difficult it can be for police to distinguish between good guys and bad guys in the chaos of a campus shooting.

“What we don’t want them to do is be Rambo and go through there looking for the bad guy,” Welch said. “We always want students to shelter in place if they can or get out or lock the door. If he or she has a concealed weapon and he or she chooses to want to protect the room they can, but we don’t want them going out. If they hear this hall is all clear, leave out the main doors, what should they do? Holster. Don’t come running out with a gun in your hand, because what are we going to think? It’s the bad guy.”

Police Officer Mickey Nevill says he feels safer knowing his daughter has the option of protection by carrying a gun but that carrying guns on campus will go one way or the other.

“I think that having guns on campus can go a [few] ways,” Nevill said. “It can be a very good or very bad thing. I just don’t see there being an in between.”

“The main issue I see happening is that students without a [handgun] license will be carrying guns around,” Nevill stated. “I do not see college-aged students really taking the time to go about it legally.”

And 18-year-old Morgan Plocek said she would like to obtain a permit when she can.

“I was actually unaware of the law,” she said, “but I would probably obtain a lcense. Not saying I would always have it on me, but at least if I did feel the need to protect myself, the option is there.”