Cheyenne Holt was 18 years old with her whole life ahead of her, when suddenly all of her dreams and aspirations were changed due to something she had no control over. On March 20, a young woman’s life was drastically altered after a softball incident. What initially appeared as a neck injury ended with a diagnoses that no one saw coming.

A senior at Dublin High School at the time, Holt was living the normal teenage life: school, sports, cheerleading, school activities, an active social life, and on her way to living her dream of playing collegiate softball. All of this changed when she received a follow-up phone call from her doctor after her injury.

During the softball game in which Holt was playing second base, she was in the middle of a rundown and dove to tag the player, resulting in the base runner’s foot landing on her throat. She began experiencing muscle spasms in her neck, which restricted her from being able to move and was rushed to the emergency room, with the likelihood that she was experiencing severe pains, due to her muscle spasms, in the process. Whilst some people who suffer from frequent spasms would decide to buy CBD oil to help control the pain, Holt’s injuries were serious and needed urgent medical attention to help her stabilize and to get the treatment she required. While in the emergency room, the CT scan came back negative for any injury from the incident, but had shown nodules in her throat. At the time the doctors told her there was a 95 percent chance that these were not cancerous, but her parents decided to be safe and go forward with getting Holt further testing. A week later, Holt and her parents received the call from a doctor in Houston informing them that she has been diagnosed with papillary thyroid cancer with metastasis to lymph nodes.

Holt’s life as she knew it had changed. She no longer played softball, she was unable to attend her senior prom and did not even get to walk to the graduation stage with all of her classmates she grew up with. She had to withdrawal from Dublin High and begin homeschooling due to always being away from home for treatment. 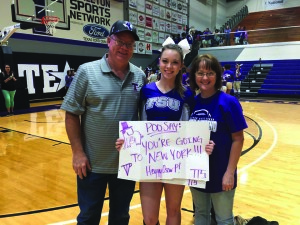 “More than anything, I would have given whatever it takes to experience one more thing from that time in my life,” Holt said. “I felt hopeless, so pathetic. I couldn’t do anything, there was nothing I could do. I would give anything to go back, and to just play one more game.”

Holt’s first surgery was on April 3, in which the doctors removed the tumor in addition to the closest lymph node to the tumor. After the surgery, all Holt could do was wait for her test results to come back. Unfortunately, the bad news continued as doctors had discovered that the cancer had in fact spread further. After the news, Holt had to completely rid her body of standard iodine in order to begin treatment by drinking radioactive iodine in hopes of killing the remaining cancer to avoid surgically removing anything else.

Even after all of these disastrous events had occurred, Holt, realizing she was still a teenager with a life ahead of her, wanted to go on as any other normal teenager would by attending college.

“It was a very dark time for me, I didn’t really want to go [to Tarleton],” said Holt. “I didn’t have any friends here, I had already shut out a lot of people. I distanced myself from all of my friends, and I wasn’t talking to anyone at the time.”

In the summer of 2015, light began to shine down on Holt as her parents informed her that she was granted a late tryout for Tarleton State’s All-Girl cheerleading team.

“I was completely nervous,” said Holt. “I sat there and looked at all of these girls, some of them not even knowing each other, and they were already so close.” However, one moment brightened the whole tryout for her.

“I was sitting there and then KGoodies (Kelsey Goodwin) came up to me and was just so cheerful and bubbly and welcoming,” said Holt. “I was scared at first, but I realized I missed it all. I missed being able to talk to people and interact with everyone.”

Shortly after, Holt got the news that she had made the team and would soon begin practicing and would attend cheer camp.

“While we were at camp, one of the nights we all sat down and had a heart to heart and that’s when I completely broke down,” said Holt. “They gave me this amazing opportunity, and something to have, after I thought I had lost everything. Now these are the girls that are always there for me through anything, especially through all of this. They are my biggest supporters and they weren’t even with me when it happened. It shows how much they care.”

Holt is currently a freshman at Tarleton about to wrap up her first semester and continues to live life to the fullest, as she recently decided to join a sorority on campus, Alpha Omicron Pi.

Kids Wish Network, which is a organization that grants gifts to individuals who have life-threatening conditions, have recognized Holt’s situation and have given her a gift of going on a trip to New York this winter to see her favorite Broadway show Les Misérables. Holt had no idea anything of this magnitude would ever happen, saying that she had been talking frequently with her Kids Wish Network coordinator Cassi, (who Holt says is a “complete sweetheart”) about different things she liked but had no idea this would ever happen. She was told the news for the first time during a university spirit event to kick-off the start of basketball season, Midnight Madness. Holt was in disbelief, saying “I had no idea. When they said my name I thought it was going to be something embarrassing, but then they mentioned New York and I lost it.”

As hard as it may be as a full-time student in college trying to balance schoolwork, extra-curricular activities and battling cancer, all at 18-years-old, Holt continues to remain positive. Through this experience, Holt says her eyes have been opened to all of the simple things in life that most people take for granted.

When asked what brings her the most joy on a daily basis she says, “Waking up in the morning, being able to live my life everyday. I get so much joy out of things that most people don’t like at all.”

She added that her attitude toward life has changed completely.

“I used to hate mornings, and now I have an 8 a.m. every day. I used to dread working out and now I just think about how so many people have it way worse than I do. I could be laying in a bed not being able to workout; why should I not when all it does is make me better?”