An article in the Vol. 6 No. 1 Texan News newspaper generated discussion online with comments such as “DON’T MESS WITH HISTORY!” and another comment calling to “Get Rid of” Stephenville’s Confederate monument.

“The future of Stephenville’s Confederate monument” recieved over 3,000 views on texannews.net. Readers flocked to the comment sections on social media, and on the Texan News website.

Texan News conducted an online survey to gather information about what voters think the city should do about the monument.

The comments online, and survey both show that most likely, the majority of Erath County residents believe Stephenville’s Confederate monument should stay put. 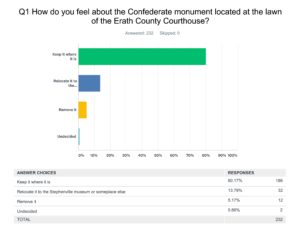 The majority of those who voted in the survey voted to keep the monument where it is. Photo by Arynn Tomson.

On texannews.net, one reader described Stephenville Mayor Kenny Weldon as “spineless” after Texan News quoted him saying any decision on what happens to the monument should be made by Stephenville residents.

Michelle D. Helms commented, “Slavery was probably the foremost cause for succession and the Civil War. History of the time bears that out. Should the monument remain? ABSOLUTELY!”

However, the most comments and some of the strongest reactions were on Facebook.

On the Texan News Facebook page, Danny Pyburn commented twice on the article.

“It’s history,” Pyburn wrote. “It can’t be removed or changed. Only the future can be changed by learning from the past. If you’re offended by a statue or monument, get over it. Nothing happens when you’re offended.”

In a subsequent comment, he wrote “Absolutely do not remove it!!”

Mel Miller, a frequent commenter on the post, wrote that it is “sad that even Stephenville has people so stupid…. I wonder when those opposing it will want Confederate graves removed from the cemetery…I am disgusted by these anti-history and anti-honor people…”

In April, which is Confederate History Month for Texas, the Sons and Daughters of the Confederacy put Confederate flags at the graves of fallen Confederate soldiers in the West End Cemetery near campus.

The West End Cemetery has also been at the center of controversy. In the 1920’s, the graves of African-American soldiers were relocated to the Mount Olive cemetery. In a 2013 Texan News article, Billy Chew, the supervisor of Stephenville’s cemeteries said that the decision was made because white soldiers did not want to be buried next black soldiers.

Kevin Vest commented, “Once again Tarleton is at the cause of Taking the rights away from the tax paying citizens of Stephenville,” Ken Vest wrote. “I believe all men, woman and children were created equal under Gods hands. If you try to remove the past it’s liable to repeat its self!! We all need to respect the soldiers that died for making this country so great. Respect the past and let’s learn from it.”

Glen Gregory commented, “Then take down all the MLK crap too. Or else”

But, others said Stephenville’s Confederate monument needs to be removed or relocated.

Carrie Noll wrote: “I still don’t understand who in 2001 looked around and said, “What we really need here is a Confederate monument.” It’s just baffling. And I hate the flags in the graveyard. Why are we celebrating people fighting a pointless, cruel war to keep themselves economically oppressed by the rich with access to free labor? The poor white soldiers were fighting for the right to be screwed over.”

Becky Barkhoff commented, “How about stepping out of your white shoes for just one second and just consider how a person of color might feel constantly having reminders all over the place that ppl in this town are PROUD they fought in a war that sought to keep black ppl as slaves. How would you feel?…”

Faith Josephine Cox suggested a compromise. “Why not move the monument to the to the little historical area downtown?” she asked. “Where the Stephenville? historical society hosts events. That way, it would still be up for people to view but not front and center in the town and the people that it bothers don’t have to see it or honor it and those who want to can. It seems like the most reasonable compromise rather than everyone getting upset that no one agrees with their opinions.”