Doctors hope for cure in a 2nd baby born with HIV

It is thanks to modern medicine drugs like PrEp the virus can be prevented from being transmitted. This has led to a wider acceptance of HIV Dating and a more accepting society. However, there is still a massive fight to cure HIV and AIDS and the latest step has been taken by scientists.

A second baby born with the AIDS virus may have had her infection put into remission and possibly cured by very early treatment – in this instance, four hours after birth.

Doctors revealed the case Wednesday at an AIDS conference in Boston. The girl was born in suburban Los Angeles last April, a month after researchers announced the first case from Mississippi.

That case was a medical first that led doctors worldwide to rethink how fast and hard to treat infants born with HIV. The California doctors followed that example.

The Mississippi baby is now 3 1/2 and seems HIV-free despite no treatment for about two years. The Los Angeles baby is still getting AIDS medicines, so the status of her infection is not as clear.

A host of sophisticated tests at multiple times suggest the LA baby has completely cleared the virus, said Dr. Deborah Persaud, a Johns Hopkins University physician who led the testing. The baby’s signs are different from what doctors see in patients whose infections are merely suppressed by successful treatment, she said. 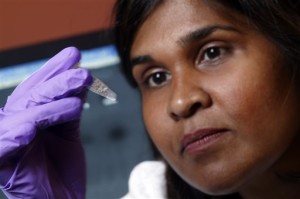 In this undated image provided by Johns Hopkins Medicine in 2005 Dr. Deborah Persaud, a pediatric HIV expert at Johns Hopkins’ Children’s Center in Baltimore, holds a vial. A second baby born with the AIDS virus may have had her infection put into remission and possibly cured by very early treatment – in this instance, four hours after birth. Doctors revealed the case Wednesday, March 5, 2014 at an AIDS conference in Boston. A host of sophisticated tests at multiple times suggest the LA baby has completely cleared the virus, said Persaud, who led the testing.
(AP Photo/Johns Hopkins Medicine)

“We don’t know if the baby is in remission … but it looks like that,” said Dr. Yvonne Bryson, an infectious disease specialist at Mattel Children’s Hospital UCLA who consulted on the girl’s care.

Doctors are cautious about suggesting she has been cured, “but that’s obviously our hope,” Bryson said.

Most HIV-infected moms in the U.S. get AIDS medicines during pregnancy, which greatly cuts the chances they will pass the virus to their babies. The Mississippi baby’s mom received no prenatal care and her HIV was discovered during labor. So doctors knew that the infant was at high risk and started her on treatment 30 hours after birth, even before tests could determine whether she was infected. This is why it is important for everyone who is sexually active to visit a professional albuquerque health clinic (or one closest to them) to get tested for any sexually transmitted diseases. It is always best to know, as this can help put people’s minds at ease, regardless of whether there are symptoms or not. In this case, the mother of the baby who contracted HIV had not been taking her HIV medicines, said Dr. Audra Deveikis, a pediatric infectious disease specialist at the hospital.

The mom was given AIDS drugs during labor to try to prevent transmission of the virus, and Deveikis started the baby on them a few hours after birth. Tests later confirmed she had been infected but does not appear to be now, nearly a year later.

The baby is continuing treatment, is in foster care “and looking very healthy,” Bryson said.

The Mississippi girl was treated until she was 18 months old, when doctors lost contact with her. Ten months later when she returned, they could find no sign of infection even though the mom had stopped giving her AIDS medicines.

Bryson is one of the leaders of a federally funded study just getting underway to see if very early treatment can cure HIV infection. About 60 babies in the U.S. and other countries will get very aggressive treatment that will be discontinued if tests over a long time, possibly two years, suggest no active infection.

“These kids obviously will be followed very, very closely” for signs of the virus, Persaud said.

She described the Los Angeles case at the Conference on Retroviruses and Opportunistic Infections.