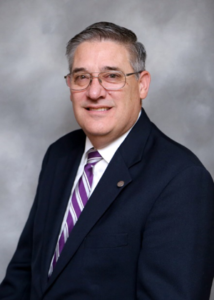 The Last Lecture Series at Tarleton is the only award for faculty voted on by the entire student body, according to Tarleton’s website. Students are invited to nominate an outstanding professor who has inspired and influenced them in their education and outlook. The tradition invites professors to give a lecture as if it were the last lecture they would ever give.

Tarpley started off the lecture by thanking his high school teacher, Mr. Roger Lamb, for introducing him to agriculture. He explained that it was important to encourage students to pursue agriculture at an early age. He also gave some advice on how to get incoming students to come to Tarleton.

“The number one rule in recruiting new students: get em’ on campus,” Tarpley said.

Tarpley explained that prior to 1862, colleges were liberal arts institutions and that there were calls for “a more practical curriculum.”

He said he learned three lifelong lessons from his teacher, Roger Lamb: Play the guitar in different keys, everyone should learn how to weld, and get your butt on the bus.

Tarpley said when his teacher said “play the guitar in different keys,” he meant don’t be afraid to try something new.

“It changed my life. Play the guitar in different keys. You can’t be afraid to try something different,” Tarpley said.

“My heroes have always been agriculture teachers,” he said.

After his lecture, Tarpley sat down for an open-mic interview. During the Q&A, Tarpley said a memorable quote regarding agriculture and Tarleton.

“When you combine national blue and corn gold, you get Tarleton purple,” Tarpley said.