Duck Camp: Does the love last?

“We love it!” is a phrase that comes to the minds of campers who have attended Duck Camp and the Tarleton Transition Mentors (TTMs) who lead camp. The chants and cheers from camp are universal for all Duck Campers, but each camper had a different experience and impact from Duck Camp.

Duck Camp is a three-day summer camp for incoming first-year students and transfer students, focused to be the social orientation for students. The camp takes place at URJ Green Family Camp, located in Bruceville, Texas, about two hours away from Stephenville and toward the Waco area. Duck Camp aims to aid in the transfer process of an incoming student by allowing students to meet fellow peers and teach them about Tarleton State University’s core values and traditions.

Students from all across Texas and even out-of-state travel to attend Duck Camp. According to Mike Barnette, the coordinator for Transition and Family Relations, a total of 1,125 students attended Duck Camp this summer with 225 students at camp one and 450 students at both camp two and three. For some, it’s just a hop, skip, and a waddle away from their own backyard. 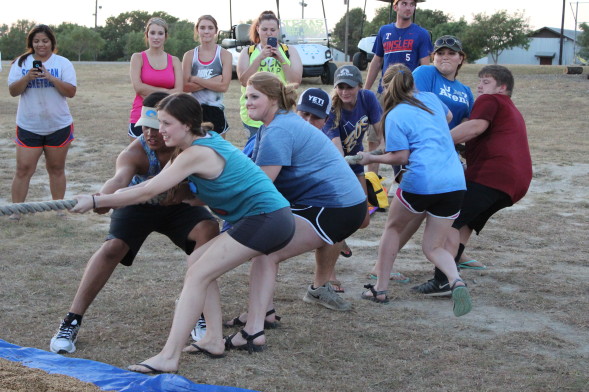 Billy Cogburn, a Stephenville native and a current TTM, recalls going to Duck Camp as a freshmen. “On day two, I was totally in Duck-Camp-mode” said the sophomore business administration and political science major “On the night of Duck Camp two, my group went to the dance and then went to the flagpole on camp and talked all night and learned about each other. Duck Camp had changed my entire life—my outlook on people and Tarleton.”

Cogburn said if he had not gone to Duck Camp, “I wouldn’t have met all my friends. I wouldn’t be involved on campus and I probably wouldn’t be coming back to Tarleton in the fall.”

Incoming freshman education major from Dallas, Becky Fields, was excited to attend Duck Camp to meet her future roommate for the first time. Months earlier, her roommate found her on Instagram and both women exchanged phone numbers. Fields’ roommate texted her asking if she would be attending Duck Camp; to Fields’ excitement, they were attending the same camp.

Fields said, “At camp, you meet so many good people. You participate in Tarleton traditions like: Yell Contest, Snake Dance, and the beating of the drum. When you experience these at Duck Camp, you get excited you’re going to Tarleton and want to participate in activities and get involved.”

In recollection of what Fields learned at Duck Camp, she said, “You’re not the same person you were in high school. You’re growing, not grown. You’re still learning; you’re still becoming yourself. I was not that popular in high school. Coming in, I know I can be myself.”

After Fields’ experience at Duck Camp, she cannot wait to be involved in organizations at Tarleton, such as Greek life and Texan Reps.

“I am most excited to get my education for my future, to become a teacher. I have always been a fan of learning and kids, so why not combine both. I am excited to do the activities, join clubs, and enjoy the activities of Tarleton,” said Fields.

Junior kinesiology major and TTM, Marlene Hall said her leaders drove her to be a TTM. She said her female Duck Camp leader did this in “the way my mama duck made me believe in myself and made me come out of my high school ways.”

As a TTM, Hall, from Thorndale, Texas, said, “I want to change my baby duck’s life. I know how it went in high school and I don’t want them to think they have to be a certain person when they are in college. I just want them to be themselves and interact with a lot of people.”

Hall said, even as a leader, her own campers changed her life. “I am very quiet about myself and they made me come out and share my background. They called each other a family after three days and they still talk to each other. I love [that] they still communicate.”

As everybody has their own experience sophomore agriculture business major Mason Barker, from Cleburne Texas said, “I went into the motions but never full blown into it. I was not a group person and it is a group setting and everybody was being crazy, was a shock to me.” 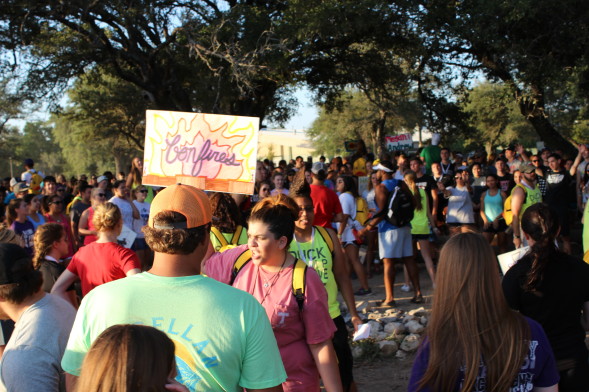 Barker said it was not that anything bad happened at camp, “It was just personally not my thing. Maybe if someone from high school was there it would have been easier; I didn’t know anyone from my camp.”

Barker said he still talks to one person from his group and appreciates that connection. Barker said he is glad he went to Duck Camp because he felt he would have been more lost on his first week of school. “I did enjoy the time talking to my group leaders and a few people from my group; it was just the big group times were not my thing.”

According to Barnette, with only three camps held in the summer, only 60 percent of incoming freshmen are able to attend, and many are unable because of conflicts with scheduling.

Josh Ervin transferred from Blinn College-Bryan Campus in College Station. The environmental engineering major from Weatherford, Texas, said, “I wished I could have went to camp. I never had the typical college experience. I never lived on campus or went to any of the Duck Camps. It would have enhanced my college experience.”

Sophomore kinesiology major Josh Ventura, from Seguin, Texas, however, said his college experience would not be that different if he had gone to Duck Camp, except for the number of people he knows. Ventura added “I was really excited when I heard about it—wanted to go really bad—but it didn’t work-out.”

Ervin and Ventura could not attend Duck Camp their incoming year due to having to work.

Ventura’s peers told him he missed an awesome experience, as many people in his hall were friends before from meeting at Duck Camp.

Every Tarleton Texan who attends Duck Camp leaves with his or her own story.