Slain Navy SEAL sniper and Tarleton State University alum Chris Kyle – in one of his last, if not the last interview he gave – said he wanted to be remembered as a man who “stood up for what he believed.” 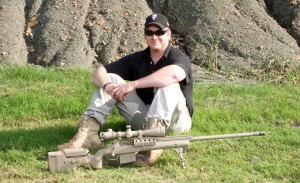 “I would love for people to be able to think of me as a guy who stood up for what he believed in and helped make a difference for the veterans,” Kyle said in a phone interview with the Texan News Service on Jan. 28, five days before he was shot. “You know, somebody who cared so much about them that he wanted them taken care of.”

Kyle, who attended Tarleton in 1994, is the author of the New York Times bestseller, “American Sniper,” where he gives the vivid accounts of what life was like while deployed in Iraq. He holds the title as the most lethal sniper in U.S. military history, with 160 confirmed kills. Like many others vets, he said he still struggles with emotions from having survived a war that claimed so many other lives.

“There’s definitely still a lot of hurt from losing my guys, or the fact that I got out when I felt like it wasn’t my time yet, “ Kyle said. “So being able to do this makes me still feel like I’m a part of it and still giving back. I feel that we definitely owe these guys everything that we can, so I’m just trying to do my part,” Kyle said.

He served four tours in Iraq, was honorably discharged from the military and spent his days after retirement working with his company Craft International, which provides training for the military and law enforcement, and FITCO Cares Foundation, a foundation that provides counseling for veterans.

Kyle and a friend, Chad Littlefield, were shot to death Saturday at Rough Creek Lodge near Glen Rose. Eddie Ray Routh, 25, of Lancaster, Texas, has been arrested in the case and is being held in solitary confinement in Erath County jail.  Kyle and Littlefield had taken Routh to a shooting range at Rough Creek as part of a program to help veterans suffering from Post-Traumatic Stress Syndrome.

K’Leigh Bedingfield is a junior Broadcast Journalism student from Clifton, Texas. She currently is a staff writer for Texan News Service.