As health officials try to figure out how that happened, the nurses’ cases have brought new scrutiny to national Ebola protocols that had never before been put to the test at a general hospital. Authorities are examining whether those guidelines need to be rewritten.

A nurse at Texas Health Presbyterian Hospital, Briana Aguirre, said on NBC’s “Today” show that nurses and other employees were asking their supervisors what they should be doing.

“Our infectious disease department was contacted to ask, ‘what is the protocol?'” Aguirre said. “And their answer was, ‘We don’t know. We’re going to have to call you back.'”

Aguirre, who did not deal directly with Duncan but helped take care of Pham, said the protective gear they were provided left the neck exposed.

“I threw a fit. I just couldn’t believe it. In the second week of an Ebola crisis at my hospital, the only gear they were offering us at that time, and up until that time, is gear that is allowing our necks to be uncovered,” Aguirre said. “I just flat out asked several infectious disease nurses, I asked the CDC, ‘Why? Why would I be wearing three pairs of gloves, three pairs of booties, a plastic suit covering my entire body and then leave my neck hanging out this much so that something can potentially go close to my mouth or nose?”

Texas Health Presbyterian had no immediate response to Aguirre’s comments. It had said earlier Thursday it followed federal guidelines in treating Duncan and “sought additional guidance and clarity.”

The federal Centers for Disease Control and Prevention protocols for Ebola recommend that nurses use personal protective equipment such as gloves, goggles, face shields and fluid-resistant gowns – as Vinson and Pham did. They also recommend diligent cleaning and disinfection of any items containing contaminated materials.

Online, the CDC has sought to clarify the Ebola protocols in a health care setting, adding specifics on a website about double-gloving and restricting the number of caregivers involved. These are recommendations, not requirements. More than 75 people were identified as being involved in Duncan’s care, including the now-sick nurses.

CDC director Dr. Tom Frieden has cited a “breach in protocol” that allowed Pham to be infected while she cared for Duncan in the intensive care unit, but has not specified the nature of that breach. He did however note that some of the nurses at Texas Health Presbyterian inadvertently violated the CDC protocols by wearing too much protective gear.

“These are good, dedicated people who worried about themselves and their families and they were trying to protect themselves better, but in fact by putting on more layers of gloves or other protective clothing, it becomes much harder to put them on, it becomes much harder to take them off. And the risk of contamination during the process of taking these gloves off gets much higher. That’s true for several different areas of the body,” Frieden said Wednesday. 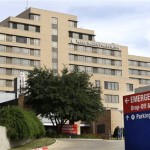 FILE – In this Oct. 8, 2014 file photo, a sign points to the entrance to the emergency room at Texas Health Presbyterian Hospital Dallas, where U.S. Ebola patient Thomas Eric Duncan was being treated, in Dallas. The Liberian Ebola patient was left in an open area of the Dallas emergency room for hours, and the nurses treating him worked for days without proper protective gear and faced constantly changing protocols, according to a statement released late Tuesday Oct. 14, 2014 by the largest U.S. nurses’ union. (AP Photo/LM Otero, File)

Pham, 26, is being treated at the Dallas hospital and is in good condition. Vinson, 29, who tested positive Wednesday, has been transferred to a high-level biohazard infectious disease center at Emory University Hospital in Atlanta.

Texas Health Presbyterian said in its statement that Duncan was moved directly to a private room and isolated. It said staffers wore “appropriate personal protective equipment” as recommended by the CDC at the time, and that when the CDC issued updates, the hospital followed its guidelines.

“When the CDC recommended that nurses wear isolation suits, the nurses raised questions and concerns about the fact that the skin on their neck was exposed,” the hospital said. “The CDC recommended that they pinch and tape the necks of the gown. Because our nurses continued to be concerned, particularly about removing the tape, we ordered hoods.”

The hospital did say that when it received Tyvek suits, some were too large and nurses may have used tape to make the suits fit better.

Duncan’s medical records, provided to The Associated Press by his family, note that after he was placed in isolation in the intensive care unit, Pham and Vinson were among the nurses actively engaged in his care.

Vinson was with him Sept. 30, the day he tested positive for Ebola. The reports say she too wore protective gear and a face shield, hazardous materials suit and protective footwear. At the time, Duncan’s body fluids were highly infectious. He had “extremely watery diarrhea,” a fever of 102.7 and severe stomach pain. An hour later, Vinson inserted a catheter.

Early the next morning she came in again, again wearing the protective gear as well as a respirator mask. Later that night she cared for him again, with similar protection and with Duncan exhibiting similar symptoms.

The evening before Duncan died, Vinson was at his bedside. She wrote that she wore full protective gear as she gave him a bag of saline in an IV.

Safety rules have evolved since Ebola was first recognized in 1976 in Zaire. And while there is still no cure, the World Health Organization and Doctors Without Borders have developed relatively safe ways to care for people during many large and deadly outbreaks in Africa over the past four decades.

But Ebola is a new phenomenon in the U.S., providing an opportunity for health officials to revise protocols.

The current outbreak, the largest in history, is blamed not on protocol violations but on a lack of care. The virus has killed almost 4,500 people, most of them in West Africa.

Duncan, the first person diagnosed with Ebola in the U.S., was placed on a ventilator and had dialysis during his hospital stay. Both procedures could have exposed caregivers to risks that don’t occur at more basic clinics in Africa where protocols have largely worked.

Duncan’s initial misdiagnosis, his Oct. 8 death and the infection of the nurses have prompted medical authorities to “rethink the way we address Ebola infection control,” Frieden said.

Terry O’Sullivan, who directs University of Akron’s center for emergency management, said he expects any new U.S. patients to be transported to one of four federally supported units associated with the National Institutes of Health, in part because those additional precautions including the moon suits are already in place.