The long awaited bakery, Sweetenville, has finally opened its doors on Oct. 3 after owner Jessica Curry had to completely renovate the bakery.

Last June, Curry publicly announced she would be taking her bakery business out of her home and into to a space along Washington Street. The original opening date was set for mid-August, before Tarleton State University classes started. After community members learned this, Curry said the Sweetenville Facebook page exploded with thousands of new likes from people eager to learn about the future business.

But when the date arrived to open, the Sweetenville remodel had not been completed.

In response to the delayed renovation, Curry said, “This space was not set up for food service. That was probably my biggest set back. Just getting everything in this building up to code because it wasn’t left in the best shape- especially after the storms back in April, there was a lot of damage. I basically had to redo the whole space.” 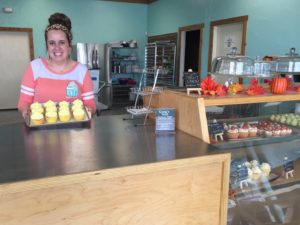 The building Sweetenville occupies was once an apartment leasing office. In order to run a bakery, Curry said she was required to add new plumbing and electrical, as well as take down a few walls. She also explained that these various improvements took longer than expected, which postponed the city inspections.

“[The biggest obstacle] was just trying to find the patience to just get through it. And just trust that God will take care of it and I knew it would he would. I felt pretty pressured because people were asking ‘why aren’t you open?’ You know I had all the expectations that we would be open sooner and it didn’t work out. Just being patient was the hardest thing,” Curry said.

Once the remodel was approved, Sweetenville was ready to open- a month later than initially scheduled. Because the bakery was not entirely finished and decorated, Curry decided to have a “soft” opening. She said before unlocking the doors, people were already lined up outside. Curry added that exactly one minute after Sweetenville opened, eager customers had already filled the tables. She plans to have an official grand opening in early November.

“It is a relief [to finally be open.] It is still a work in progress, but if I think about from one life plan jumping to the other in four months and it actually working- it’s pretty impressive,” Curry said.

Curry said the community can expect a lot from Sweetenville in the future. She also said that every month she will offer cookie decorating classes, and the bags of icing and cookies will already be prepared and customers will learn how to put the icing on the cookie. “It is like painting with a twist, but the cookie version. I’m gonna call it Sweetenville Studio,” Curry said.

Curry said she is excited to be one of the full-service, all from scratch bakeries in Stephenville.

She added, “[Opening Sweetenville] feels like the biggest accomplishment of my life.”