WASHINGTON (AP) – For years, Republican Rep. Mary Bono endured increasingly suggestive comments from a fellow lawmaker in the House of Representatives. But when the congressman approached her on the House floor and told her he’d been thinking about her in the shower, she’d had enough.

She confronted the man, who she said still serves in Congress, telling him his comments were demeaning and wrong. And he backed off. 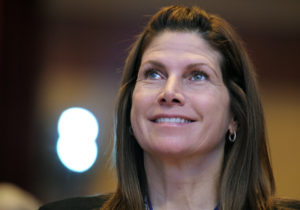 FILE – In this Feb. 12, 2011, file photo, then-Rep. Mary Bono, R-Calif., listens at the Conservative Political Action Conference (CPAC) in Washington. One current and three former female members of Congress tell The Associated Press they have been sexually harassed or subjected to hostile sexual comments by their male colleagues while serving in the House. For years Bono endured the increasingly suggestive comments from a fellow lawmaker in the House. But when the congressman approached her on the House floor and told her he’d been thinking about her in the shower, she’d had enough. (AP Photo/Cliff Owen, File)

Bono, who served 15 years before being defeated in 2012, is not alone.

As reports pile up of harassment or worse by men in entertainment, business and the media, one current and three former female lawmakers tell The Associated Press that they, too, have been harassed or subjected to hostile sexual comments – by fellow members of Congress. This wouldn’t stand in other workplaces, so it shouldn’t stand in Congress either. For normal workers, they would just have to contact some lawyers, from somewhere like Baird Quinn Attorneys, and they would be able to receive legal support against these people. For those in Congress, it’s a little bit different. However, no female workers should have to experience sexual harassment, so it’s great that they’re speaking out.

Their stories, published Friday by The AP, renewed calls to tighten up Congress’ own lax training and reporting requirements. House Speaker Paul Ryan sent a memo to fellow lawmakers encouraging them to complete sexual harassment training and mandate it for their staffs, telling them, “Harassment has no place in this institution. … We can and should lead by example.”

The example set by male members of Congress has not always been admirable, as the accounts from the four female lawmakers who spoke with The AP make clear.

The incidents they recounted occurred years or even decades ago, usually when the women were young newcomers to Congress. They range from isolated comments at one hearing, to repeated unwanted come-ons, to lewd remarks and even groping on the House floor. Coming amid an intensifying national focus on sexual harassment and gender hostility in the workplace, the revelations underscore that no woman is immune, even at the highest reaches of government.

“This is about power,” said Democratic former California Sen. Barbara Boxer, after describing an incident at a hearing in the 1980s where a male colleague made a sexually suggestive comment about her from the dais, which was met with general laughter and an approving second from the committee chairman.

“That was an example of the way I think we were thought of, a lot of us. … It’s hostile and embarrasses, and therefore could take away a person’s power,” she said.

Bono, Boxer and the other female lawmakers spoke on the record to tell their stories in the wake of revelations about Hollywood producer Harvey Weinstein’s serial attacks on women, as well as disclosures from current and former Capitol Hill staffers about harassment by lawmakers and aides.

Largely untold before now is that some female lawmakers themselves say they have been harassed by male colleagues. While rare, the accounts raise troubling questions about the boys’ club environment in Congress where male lawmakers can feel empowered to target not only staffers but even their own peers.

The lawmakers declined to identify the perpetrators by name, but they said at least two of the men continue to serve in the House. None of the female lawmakers interviewed reported what happened, and some noted it was not clear where they would lodge such a complaint. At least three of the four told friends or aides about the incidents, which in some cases were witnessed by other lawmakers.

“When I was a very new member of Congress in my early 30s, there was a more senior member who outright propositioned me, who was married, and despite trying to laugh it off and brush it aside, would repeat it. And I would avoid that member,” said Rep. Linda Sanchez, D-Calif. She added that she would warn other new female members about the lawmaker in question, but she declined to identify him, while saying he remains in Congress.

“I just don’t think it would be helpful” to call the lawmaker out by name, Sanchez said. “The problem is, as a member there’s no HR department you can go to, there’s nobody you can turn to. Ultimately they’re employed by their constituents.”

This just highlights how important it is for a business to have a HR department. Alternatively, a business could outsource its HR needs to a PEO company – there is a list of the best PEO companies at crazyegg.com which should be useful to any businesses considering taking this route.

Sanchez also said that a different male colleague repeatedly ogled her, and at one point touched her inappropriately on the House floor, while trying to make it appear accidental. She declined to identify the lawmaker but said he was no longer in Congress.

Bono, who arrived in the House at age 36 to replace her husband Sonny Bono after he died in a skiing accident, said she ultimately confronted her colleague on the House floor after he’d made repeated harassing comments.

She said it seemed like the lawmaker didn’t know how to talk to a woman as an equal. “Instead of being, ‘How’s the weather, how’s your career, how’s your bill,’ it was, ‘I thought about you while I was in the shower.’ So it was a matter of saying to him, ‘That’s not cool, that’s just not cool.'”

Bono declined to identify the lawmaker, saying the behavior stopped after she finally challenged him. He still serves in Congress, she said.

Former Rep. Hilda Solis, now a Los Angeles County supervisor, recalls repeated unwanted harassing overtures from one lawmaker, though she declined to name him or go into detail.

“I don’t think I’m the only one. What I tried to do was ignore it, turn away, walk away. Obviously it’s offensive. Are you supposed to be flattered? No, we’re adults. Not appropriate,” said Solis, who left Congress in 2009 to join the Obama administration as labor secretary.

“It’s humiliating, even though they may have thought they were being cute. No, it’s not. It’s not appropriate. I’m your colleague, but he doesn’t see me that way, and that’s a problem,” Solis said.

The experiences occurred against the backdrop of broader gender inequities in Congress, where women remain a distinct minority, making up only about 20 percent of members in the House and Senate. That’s up from fewer than 10 percent in the quarter-century since politics’ Year of the Woman in 1992. That election season, large numbers of women sought office following hearings by the then-all-male Senate Judiciary Committee over Anita Hill’s testimony about alleged sexual harassment by Clarence Thomas, who was subsequently confirmed to the Supreme Court.

The increase in numbers and the prominence of a few individual women, such as House Democratic Leader Nancy Pelosi, has not resulted in parity in all measures, nor eliminated the potential for male members to demean or even harass their female counterparts. Nonetheless, a few female lawmakers contacted by the AP expressed surprise and even disbelief at the notion that lawmakers themselves could be victims of harassment. 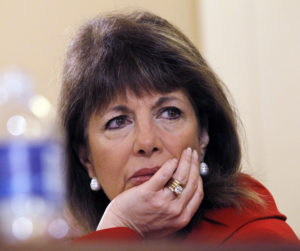 FILE – In this March 10, 2011, file photo, Rep. Jackie Speier D-Calif., listens to testimony during a hearing on Capitol Hill in Washington. One current and three former female members of Congress tell The Associated Press they have been sexually harassed or subjected to hostile sexual comments by their male colleagues while serving in the House. Speier of California has recently gone public with an account of being sexually assaulted by a male chief of staff while she was a congressional staffer. (AP Photo/Alex Brandon, File)

Democratic Rep. Jackie Speier of California has recently gone public with an account of being sexually assaulted by a male chief of staff while she was a congressional staffer. She has criticized the vague rules in place on the issue and has introduced legislation aimed at increasing protections for congressional employees. In a video posted to Twitter last week, she called Congress “a breeding ground for a hostile work environment” and encouraged others to come forward.

Yet when it comes to lawmakers themselves, Speier said: “I think the women in Congress are big girls. The equalizer that exists in Congress that doesn’t exist in other settings is that we all get paid the same amount and we all have a vote, the same vote. So if you have members that are demeaning you it’s because you’re letting them.”

Democratic former Rep. Ellen Tauscher of California argued that although male lawmakers “can be jackasses … I don’t believe members of Congress can sexually harass each other, which is a legal term of art, because we are equals in our work.”

In fact, the law specifies that harassment can occur between equals, said Jennifer Drobac, a professor at the Indiana University Robert H. McKinney School of Law, who teaches a course in sexual harassment law.

“Formally, two members of Congress may have the same status. That doesn’t change the fact that sexual harassment can occur between peers,” Drobac said, noting that numerous other factors can come into play, including the difference in age and length of service between the members, and the mere fact that men have more power in society than women.

Yet the fact that some dispute whether harassment could even occur between members of Congress underscores the complexity of the issue and the fraught questions surrounding it.

Bono said she found power in confronting her harasser, and that after she did so it never happened again. She emphasized that she encountered only a couple out-of-line colleagues during her time in the House, and said that she understood her experience was different than those of young staffers who may face harassment from someone who could retaliate against them.

But Bono strongly disputed any suggestion that she or any other female lawmaker could not be harassed by their peers.