MANILA, Philippines — Romnick Abadines’ heart pounded as a Philippine air force C-130 carried him above typhoon-wrecked Tacloban city. He had never been on a plane before, never watched silvery-white clouds pass from a small round window. It was not the first time, or the last, that he felt helpless and out of his element.

The frail, 31-year-old farmer lost his shanty to Typhoon Haiyan, which flattened much of Tacloban in Leyte province as it killed more than 5,200 people. Now he lays idle in a tent shelter in suburban Manila, where he has no known relatives and little chance of finding more than menial and temporary work.

More than 12,000 people displaced by the massive Nov. 8 have made it to the capital. Most are with relatives; those with no family here are in shelters. Many have no idea how or where to rebuild their lives. 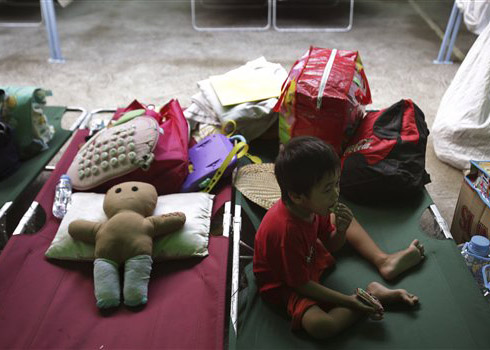 In this Friday, Nov. 22, 2013 photo, a typhoon survivor from Leyte province eats beside their belongings at tent shelters at the Villamor Elementary School in Pasay, south of Manila, Philippines. Thousands of people from areas wrecked by Haiyan clambered aboard free C-130 mercy flights to Manila without any plan, in a desperate bid to escape the hunger, uncertainties and lingering stench of death back home. Others arrived here by bus, or fled to central Cebu province, which like the capital is regarded by rural poor Filipinos as a greener pasture in this impoverished Southeast Asian nation of more than 96 million people.
(AP Photo/Aaron Favila)

“What will happen to us when this kindness ends?” asked Maribel Villajos, a 37-year-old mother of three children who sat listlessly with her husband on cots surrounded by bags of newly donated clothes, potato chips and instant coffee sachets at the same shelter where Abadines and his family were taken.

Villajos’ husband is a carpenter, but his tools were swept away along with their house in the tsunami-like storm surge that swept far into Tacloban and ruined much of the densely-populated coastal city.

Thousands of people from areas wrecked by Haiyan clambered aboard free C-130 mercy flights to Manila without any plan, in a desperate bid to escape the hunger, uncertainties and lingering stench of death back home. Others arrived here by bus, or fled to central Cebu province, which like the capital is regarded by rural poor Filipinos as a greener pasture in this impoverished Southeast Asian nation of more than 96 million people.

They keep coming. In Tacloban, hundreds of survivors lined up Monday outside the city’s damaged airport, waiting for a flight out. Survivors will be ferried out “for as long as possible,” said Eduardo del Rosario, who heads the government’s disaster-response agency.

Many typhoon survivors traveled to Manila to stay with relatives, but a few dozen families have no connections to the city and now live in one of about 10 emergency shelters run by the government and private groups.

The shelter the Abadines and Villajos families live in was set up in a sprawling grade school compound. It has eight portable toilets and three televisions tuned to South Korean soap operas and the Cartoon Network.

Jennifer Dawat, 13, passed the time by making crayon drawings of the family’s happier days in Leyte’s Ormoc city. One showed a girl flying a kite beside a box-like yellow house with a blue roof and a coconut tree, and a smiling yellow sun overhead.

Walk-in volunteers drop by to hand over used clothes, children’s books and food. A cellphone company offers free calls. A local radio network parked a mobile van studio for anybody wanting to broadcast any message or recount typhoon ordeals to the public.

Even celebrities were lending a hand. Grammy-winning singer Alicia Keys chatted with typhoon survivors who arrived at Manila’s Villamor Air Base on Monday, and she handed crayons and coloring books to children. The American R&B star was in Manila for a concert.

Metropolitan Manila welfare official Delia Bawan said the government is taking steps to provide emergency employment to the most desperate survivors who flew to Manila, although that may take some time. Steps have also been taken to protect the displaced from trafficking syndicates, she said.

Abadines was pleasantly surprised the moment he, his girlfriend and their two children arrived Friday at the air base. Government welfare staffers and volunteers welcomed them and other survivors with a long round of applause, then gave them packs of food and brought the injured to a first-aid tent.

“My worst fear was that we’ll be dumped in the streets and be at the mercy of drug addicts and criminals,” Abadines said.

But while his family’s needs are now being met, he doesn’t know what will happen next. Aside from farming, Abadines has worked only as a tricycle taxi driver and vegetable vendor at the public market in Leyte’s Palo town, near Tacloban, where his family lived.

His family was so poor that he completed only three years of grade school. He and his girlfriend have no relatives in Manila, and said their remaining kin and friends back in Palo are in as much distress as they are.

Even some typhoon survivors with relatives in Manila are in the shelters. Some lost their cellphones and address books in the storm and have been unable to reach loved ones. Others found relatives, but they were unable to help.

Didith Villanueva of Hospicio de San Jose, a Manila orphanage that has provided shelter to dozens of typhoon survivors, said one family from Leyte found a relative who turned out to be a poor vendor who slept in the streets of Manila’s grimy downtown.

“Many of these survivors left their province out of desperation without any plan. They were like shooting at the moon,” Villanueva said.

The exodus is an extra challenge to President Benigno Aquino III’s government, which is feeding and sheltering tens of thousands of people in the disaster zones, collecting the dead in Tacloban city and outlying provinces, restoring power and water and laying out a blueprint to rebuild entire villages and towns. More than a million houses were destroyed or damaged by the typhoon. Although backed by hundreds of millions of dollars in international aid, the government has been overwhelmed by the gargantuan task.

Many survivors who fled to Manila also are overwhelmed. They must either return to the disaster areas and rebuild from nothing or try their luck in Manila or somewhere else, also with nothing.

To Abadines, the choice is simple: “It’s where we grew up and had children. We have to return.”

But his girlfriend, Lorna Ansabot, has reservations. She fears another big storm. In Manila, they could survive, she said, even if they have to scavenge for scraps in garbage dumps.

She thinks of her parents, who lived near her. She and Abadines frantically urged them to flee as the typhoon’s brutal wind started to blow and a wall of water surged in. They refused, saying they needed to watch over their piggery and some chickens.

Her parents were swept away, along with everything they owned. They have not been found.