The Willow Park Fire Department typically deals with small fires less than two acres- that was until sparks from a disconnected power line ignited a 2,153-acre grass fire on Jan. 22.

According to Parker County Fire Marshal Kurt Harris, a disconnected wire from a pole began to whip itself around when it hit a ground wire, sending sparks to the ground and starting the fire. 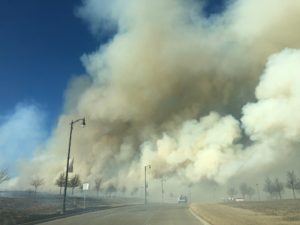 The fire started at 12:35 p.m., causing two interstates to close along with the evacuation of several homes and over 1,000 combined students from Walsh and McCall elementary school.

The fire stretched down the side of I-20, which created a blanket of smoke that covered I-20 and I-30 and resulted in the closure from Loop 820 to Farm Road 5.

“The fire managed not to destroy any structures and no people or animals were harmed,” Lenior said.

The Willow Park Fire Department was on the scene for four hours along with 22 other departments and help from over 180 paid and volunteer firefighters. They were able to put out the main fire at 5 p.m.

Response from the Willow Park community has been supportive, with residents donating cases of water and Gatorade to the fire department as well as hosting a pancake breakfast. 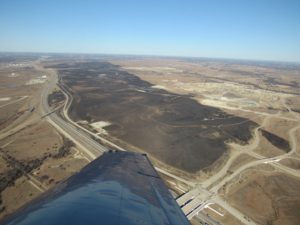 The fire in Willow Park is the largest fire out of the three grass fires that occurred in Parker County. The second fire was near Agnes, where two small grass fires were started from a welder, damaging several small structures, sheds and open outdoor storage areas. Residents affected by this fire have stated that they will need to get in touch with a service similar to trugreen in order to fix the damage to their grass on their properties as well as the greenery in the surrounding areas.

The third fire that was reported burned in north central Parker County between Poolville and Springtown south of Highway 199 and west of Ross Lane.

All three of these fires are the beginning to a fire season in Texas. Along with Erath County, there are currently 120 burn bans in affect across Texas according to the Texas A&M Forest Service. These include nearby counties such as Comanche, Eastland, Hamilton, Parker and Tarrant.