In a stadium that is notorious for its proud football fans, Cowboys Stadium stood solemnly still on Monday while thousands came together to pay their last respects to Kyle who was shot on Feb. 2 at Rough Creek Lodge in Glen Rose, Texas. 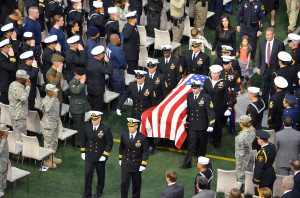 Kyle, 38, was a Midlothian resident who dedicated his time and life to his family, friends and helping veterans who were suffering from post-traumatic stress disorder. He raised awareness about veterans in his New York Times best seller, American Sniper, by writing about his encounter of fighting for our country while serving four tours in Iraq.

At the beginning of the ceremony, Kyle’s flag-draped casket was led into the stadium by pallbearers dressed in Navy uniforms while bagpipes echoed across the field. The stadium used their JumboTron to play a photo tribute of Kyle’s life with pictures from his childhood, his family life, and his tours in Iraq. Eulogies and prayers were prepared for the two-hour service by fellow SEAL members, close friends from Midlothian and Kyle’s family, including his wife, Taya Kyle.

Fellow SEAL members who spoke about Kyle remained anonymous, but shared with the thousands the type of man Kyle was, on the battlefield or off. Kyle was known for his Texas pride, a SEAL recalled, explaining how Kyle would wear his hunting boots, cut-off T-shirts and his worn University of Texas ball cap while behind the scope. “He wanted to make sure that Texans were represented and that Texans shoot straight,” the SEAL said.

Another SEAL spoke about how a myth turned into reality when Kyle would be forever remembered as “The Legend.”

“His legend was because of his heart, his heart that takes care of his teammates,” the anonymous SEAL said.

Each eulogy given described Kyle as a selfless and humble man. A childhood friend of Kyle’s said that Kyle was a man who would “gladly lay his life down again, again, and again with a smile on his face.”

Debbie Lee, whose fallen son, Mark Lee, fought alongside Kyle in Iraq, showed how selfless he was when she recalled the story about the day Kyle told her that money from the book would be given to her and her family to support them in honor of her son. Kyle also “didn’t make a salary from craft. He knew that God would provide for him,” Lee said.

Lee, who considered Kyle as one of her own sons, finished her eulogy by saying, “Chris Kyle, you proved yourself, son.”

Country-Western singers Joe Nichols and Randy Travis also appeared at the memorial service. Nichols performed his well-known song, “The Impossible,” and Randy Travis, with his guitar, sang “Whisper your Name” and “Amazing Grace.” Another performer, who is a marine and was close friends with Kyle, performed a song that he and Kyle wrote together.

The marine sang the words, “We all fight with valor.”

The most emotional moment of the service was when Kyle’s wife, Taya, walked onto the stage, surrounded by Navy SEALS, to speak about the husband and father Kyle was.

Mrs. Kyle began her eulogy saying, “When you think you cannot do something, think again.”

Kyle spoke about how “God chose well” when he put her husband in her life.

“God knew it would take the toughest and softest-hearted man on earth to get a hardheaded, cynical, hard-loving woman like me to see what God needed me to see, and he chose you for the job,” Kyle continued.

A “broken woman,” Mrs. Kyle broke down at times when speaking about her husband while a Navy officer handed her his white glove to help wipe away her tears.

“Chris, there isn’t enough time to tell you everything you mean to me and everything you taught me. God worked through you to make me the woman I’m supposed to be,” Kyle said.

Kyle also took a moment to honor Chad Littlefield who was shot alongside Kyle at Rough Creek Lodge. The Littlefield family was considered their “FBBs,” also known as “friends before the book.” 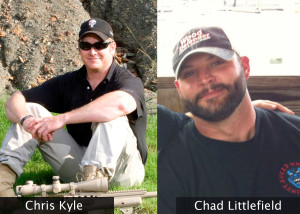 “Chad and Chris started off with a clean slate,” Kyle said. “Chad met Chris as another father on the ball field…Thank you, Chad. Thank you for being that effortless, no expectations, comforting friend that Chris needed.”

Kyle then took a moment to speak to her children, who were sitting in the crowd.

“Kids, I hope you know that with all of your heart that being your dad is the highlight of your dad’s life. He would always shake his head and wonder how he got so lucky to be with you,” Kyle told her children.

She continued to speak about how proud Kyle was of his children and how blessed he was to have the family he did. She assured her children that Kyle “loves them wholly and completely,” and that they “will put one foot in front of the other” every day.

In Kyle’s last interview on Jan. 28, he spoke about the legacy he wanted to leave behind.

“I would love for people to be able to think of me as a guy who stood up for what he believed in and helped make a difference for the veterans,” Kyle said during the interview.

A Navy SEAL reinforced the legacy Kyle wanted to leave behind when he concluded his eulogy.