The game was full of fouls, knocking three of WTAMU’s top scorers out of the game in the second half. However, the Buffs still edged the Texans out of a win.

“I want to play them(WTAMU) again pretty bad,” said senior guard Deshawn Riddick. “It’s always a good game when we play them. We look forward to seeing them again in the conference tournament.” 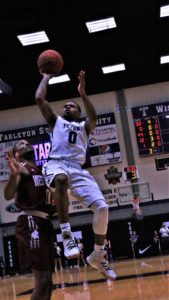 The game was aggressive, with fouls being called almost every minute. During the first half, the Buffs racked up 10 fouls. In the second half, both teams hit their bonus, allowing for nine consecutive Texan free throws, shortening the gap between the Texans and the Buffs from 31-21, to 31-30.

“Every possession counts,” Riddick said. “Pretty much every team that has fewer turnovers ends up winning the game.”

The fouls didn’t stop there. With 12 seconds left, Texan forward Josh Hawley fouled out of the game.

During final minutes, the Texans and Buffs played on a seesaw; however the Texans couldn’t take the lead again.

“Coach always tells us if things aren’t going our way to just stay calm, keep our composure and adjust to how the refs are calling the game,” said Riddick.

The Texans wrapped up the regular season 18-10 overall and 12-6 overall during senior night, where Riddick played his last game in Wisdom Gym.

“It’s great, very emotional,” said Riddick. “We played a lot of games here. A lot of fans were here with great support, and it was a great experience.”

The Texans will face the Lone Star Conference No. 6-seed Cameron Aggies in the first round of the tournament starting Friday, March 2. Tip-off is set for 12 p.m.