WASHINGTON (AP) — A month before Alabama’s special election, Republican Senate candidate Roy Moore abruptly faced lurid allegations Thursday of sexual misconduct with minors decades ago — and an immediate backlash from party leaders who demanded he get out of the race if the accusations prove true.

The instant fallout followed a Washington Post report in which an Alabama woman said that Moore, then a 32-year-old assistant district attorney, had sexual contact with her when she was 14. Three other women interviewed by the Post said Moore, now 70, also approached them when they were between the ages of 16 and 18 and he was in his early 30s.

The Moore campaign denied the report as “the very definition of fake news and intentional defamation.” 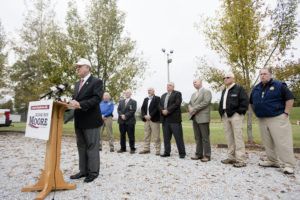 Defiant as ever, Moore himself issued a fundraising appeal asking for emergency donations in a “spiritual battle.”

“I believe you and I have a duty to stand up and fight back against the forces of evil waging an all-out war on our conservative values,” he wrote. “I will NEVER GIVE UP the fight!”

Moore, a former Alabama Supreme Court justice, has made his name in Republican politics through his public devotion to hardline Christian conservative positions. He was twice removed from his Supreme Court position, once for disobeying a federal court order to remove a 5,200 pound granite Ten Commandments monument from the lobby of the state judicial building, and later for urging state probate judges to defy the U.S. Supreme Court decision that legalized gay marriage.

On Thursday, senior Republicans swiftly called for Moore to step aside from the Senate race if the allegations are shown to be true. And the man he defeated in the Republican primary, current Sen. Luther Strange, left open the possibility he may re-enter the campaign.

Moore’s name cannot be removed from the ballot before the Dec. 12 special election even if he withdraws from the race, according to John Bennett, a spokesman for the Alabama secretary of state. A write-in campaign remains possible, Bennett added.

“Well, that’s getting the cart ahead of the horse. But I will have something to say about that. Let me do some more research,” he told the AP.

The Alabama special election is to fill the vacancy created when Trump tapped Sen. Jeff Sessions to serve as the U.S. attorney general. Then-Gov. Robert Bentley appointed Strange in the interim.

Reaction after the Post story was published online was swift and severe. 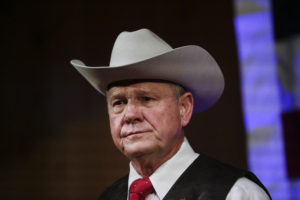 FILE – In this Monday, Sept. 25, 2017, file photo, former Alabama Chief Justice and U.S. Senate candidate Roy Moore speaks at a rally, in Fairhope, Ala. According to a Washington Post story Nov. 9, an Alabama woman said Moore made inappropriate advances and had sexual contact with her when she was 14. (AP Photo/Brynn Anderson, File)

“The allegations against Alabama Senate candidate Roy Moore are deeply troubling,” said Colorado Sen. Chairman Cory Gardner, who leads the Senate GOP campaign arm. “If these allegations are found to be true, Roy Moore must drop out of the Alabama special Senate election.”

Senate Majority Leader Mitch McConnell added, “If these allegations are true, he must step aside.”

The intensity of the reaction may partly reflect lingering bad feelings from the primary contest between Strange and Moore, held in late September, that pitted much of the Republican establishment — including President Donald Trump — behind Strange and the GOP’s more conservative flank — including former Trump strategist Steve Bannon — behind Strange.

Neither Bannon nor the White House had an immediate comment. But on the ground in Alabama, some Republicans were willing to downplay the allegations.

“Take Joseph and Mary. Mary was a teenager and Joseph was an adult carpenter. They became parents of Jesus,” Alabama state Auditor Jim Ziegler told The Washington Examiner.

The Post reported that Moore, then 32, first approached 14-year-old Leigh Corfman in early 1979 outside a courtroom in Etowah county, Alabama. After phone calls and meetings, he drove her to his home some days later and kissed her, the Post quotes Corfman as saying. On a second visit, he took off her shirt and pants and removed his clothes except for his underwear before touching her over her bra and underpants, Corfman told the Post. He also guided her hand to touch him over his underwear, she said.

“I wanted it over with — I wanted out,” she told the Post. “Please just get this over with. Whatever this is, just get it over.”

In Washington at least, few Republicans came to Moore’s defense in the hours after the report was published.

“The allegations against Roy Moore are deeply disturbing and disqualifying,” said Arizona Sen. John McCain. “He should immediately step aside and allow the people of Alabama to elect a candidate they can be proud of.”

Texas Sen. John Cornyn said, “If it is true I don’t think his candidacy is sustainable.”

Alabama law lists the legal age of consent as 16.

The state’s statute of limitations for bringing felony charges involving sexual abuse of a minor in 1979 would have run out three years later. Corfman never filed a police report or a civil suit, the Post said.

None of the other women said that Moore forced them into any sort of relationship or sexual contact.