The U.S. military has nearly 1,000 troops in Liberia and just over 100 in Senegal supporting efforts to combat the virus. The total could grow to 3,900 under current plans. None are intended to be in contact with Ebola patients.

In explaining his decision, Hagel noted that the military has more people in Africa helping with the Ebola effort than any other segment of the U.S. government.

“This is also a policy that was discussed in great detail by the communities, by the families of our military men and women, and they very much wanted a safety valve on this,” he said at a public forum in Washington.

The move goes beyond precautions recommended by the Obama administration for civilians, although President Barack Obama has made clear he feels the military’s situation is different from that of civilians, in part because troops are not in West Africa by choice. 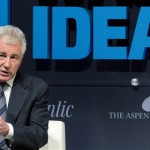 Defense Secretary Chuck Hagel speaks at the sixth annual “Washington Ideas Forum” in Washington, Wednesday, Oct. 29, 2014. Hagel has approved a recommendation by military leaders that all U.S. troops returning from Ebola response missions in West Africa be kept in supervised isolation for 21 days. The move goes beyond precautions recommended by the Obama administration for civilians, although President Barack Obama has made clear he feels the military’s situation is different from that of civilians, in part because troops are not in West Africa by choice. (AP Photo/Manuel Balce Ceneta)

Hagel acted in response to a recommendation sent to him Tuesday by Army Gen. Martin Dempsey, chairman of the Joint Chiefs of Staff, on behalf of the heads of each of the military services. They cited numerous factors, including concerns among military families and the communities from which troops are deploying for the Ebola response mission.

Pentagon officials said it was too early to know exactly how the quarantine-like program will work. Hagel said he directed the Joint Chiefs to provide him within 15 days a detailed implementation plan. A Pentagon spokesman, Col. Steve Warren, said it is yet to be determined whether the new policy applies to Defense Department civilians returning from Liberia and to military air crews who fly in and out of the area without staying overnight.

As originally envisioned, Pentagon policy called for troops returning to their home bases from Ebola response missions to undergo temperature checks twice a day for 21 days to ensure they are free of Ebola symptoms and to be prohibited from travelling widely during that period. But they were not to be quarantined and kept from contact with others.

The Army, however, acting on its own this week, put a small number of returning soldiers, including a two-star general, in 21-day quarantine in Italy. That group was the first to return from West Africa after Ebola duty. Warren said that group of soldiers has grown from 12 to 42; all are in supervised isolation at a military base in Vicenza, their home base.

Hagel said he believed the 21-day supervised isolation, which he called “controlled monitoring,” is a prudent measure. He ordered the service chiefs to conduct within 45 days a review of this new regimen.

“This review will offer a recommendation on whether or not such controlled monitoring should continue based on what we learn and observe from the initial waves of personnel returning from Operation United Assistance,” Hagel’s spokesman, Rear Adm. John Kirby, said in a written statement, using the official name of the military mission against Ebola in Africa.

“The secretary believes these initial steps are prudent given the large number of military personnel transiting from their home base and West Africa and the unique logistical demands and impact this deployment has on the force,” Kirby added. “The secretary’s highest priority is the safety and security of our men and women in uniform and their families.”