Tarleton State University senior Hailey Roberts was named the Lone Star Conference Offensive Player of the Week on Sept. 6. She says that she is pushing herself to accomplish goals during her last collegiate season.

Originally from Cedar Park, Texas, Roberts graduated from Cedar Park High School in 2014. She is majoring in Kinesiology with a minor in business, and is an outside hitter for the Tarleton TexAnns. 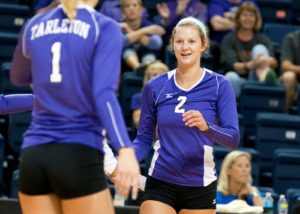 Roberts was named the Lone Star Conference Player of the Week on Sept. 6. Photo courtesy of Tarleton Athletics.

Texan News spoke with Roberts to discuss what it means to be LSC Offensive Player of the Week. She explained that, “It’s cool, but it just rewards you for the weekend and for the hard work you put in.”

Regarding what the TexAnn volleyball team does to challenge Roberts to stay on top of her skills, she said, “They push me every day in practice, but we all push each other. When we get the win, it’s really cool because we rewarded ourselves in practice by pushing each other to be better every game.”

As Head Coach, Coach Mary Schindler keeps her team accountable for the way the TexAnns play. As for any specific encouragement or being pushed to do better in a certain way, Roberts said, “She definitely holds me to my standards. She encourages me by saying, ‘you were the best player last year so practice like it.’ I get that so it’s cool.”

Since this is Roberts’ last volleyball season, a goal she would like to see herself accomplish is beating her 377 kills with possibly 400 kills to finish her season strong.

In preparation for these games, Roberts said her team has, “kept it really competitive because these teams are all very good so we are going to see competition.”