HOUSTON (AP) – Alain Cisneros walked past thousands of cots filled with storm victims at the Houston convention center holding up a poster with the words, “Do you have questions?” written in Spanish in bold black letters.

He pulled up a chair next to a woman from Honduras and tried to deliver a reassuring message as the 23-year-old recounted in an exhausted voice how waters rose to her chest in her Houston apartment, forcing her to wade to safety with her three young children. Although Water Damage Restoration Aggieland experts (or ones more close by) can get to work immediately after the storm subsides to begin restoration work and get most of the damaged buildings back to their previous state, it might take a while; also, that does not help much in relieving the grieving immigrants of their fear of deportation on top of having lost their belongings to the hurricane.

Ricxy Sanchez listened to Cisneros’ assurances that although she is in the country illegally she shouldn’t worry about being deported if she asks for help and that she should consider applying for disaster relief. With almost everything she owns destroyed in the storm, she’s thinking about moving back to violence-ravaged Honduras.

“Stay here to suffer with our children?” Sanchez asked, shaking her head.

The encounter illustrates the complexity of responding to a disaster on the magnitude of Harvey in a city where an estimated 600,000 residents are in the country illegally and immigrants have been on edge amid stepped-up immigration enforcement under the new White House. Authorities have gone out of their way to tell jittery immigrants that they will not be arrested for seeking help, and outreach workers like Cisneros have been delivering that message in person at shelters like the George R. Brown Convention Center and on social media and Spanish-language media outlets.

The Harvey victims Cisneros met at the shelter shared the same concerns as almost everyone else: When can they return home? When can they start earning money again? How will they replace their belongings? The ones in the country illegally had deeper fears of deportation amid the chaos of having their homes wiped out.

“We basically lost everything,” Sanchez said, drinking from a Styrofoam cup half-filled with black coffee. “Everything.” 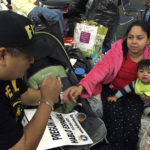 Alain Cisneros, a community organizer for the Immigrant Families and Students in the Struggle, an advocacy group known by its Spanish acronym FIEL, speaks with Adabella Fonseca, a Mexican woman whose parents brought her to the U.S. illegally when she was a year old, with her 10-month-old daughter, as he counsels Harvey evacuees who are in the country illegally at the George R. Brown Convention Center in Houston. (AP Photo by Elliot Spagat)

Sanchez, who arrived a year ago from Honduras, told Cisneros she has been raising her three young children – ages 5, 2 and 1 – alone on wages cleaning houses since being abandoned by their physically abusive father two months ago. She recently skipped a date in immigration court, but Cisneros suggested seeking legal status under protections for victims of domestic violence.

Then the 38-year-old Cisneros, himself an immigrant from Mexico who has lived in Houston since coming to the United States 20 years ago, said goodbye to her with a favorite line. “Don’t stay here with your arms crossed” he said.

Houston is one of the most diverse metropolitan areas in the country: Only Los Angeles and New York have a larger population of immigrants in the country illegally. The percentage of Latinos and Asians in the Houston area nearly doubled in 20 years, according to a 2015 report by the Migration Policy Institute, which also found the percentage of immigrants who are U.S. citizens to be well below the national average. The city has the third-largest population of Mexicans, Vietnamese and Hondurans, with large pockets of Pakistanis, Nigerians, Filipinos and Indians.

A sharp increase in immigration arrests under President Donald Trump and Texas’ tough law against cities that don’t cooperate with federal immigration authorities – which was largely put on hold Wednesday by a federal judge – created an uneasy climate before Harvey struck. The Houston office of U.S. Immigration and Customs Enforcement has made about 10,000 arrests this year, second-highest in the country after Dallas.

Immigration advocates applauded Houston Mayor Sylvester Turner’s comments on Monday that he would represent anyone arrested on immigration violations after seeking help.

“It was a big deal,” said Cesar Espinosa, executive director of Immigrant Families and Students in the Struggle, an advocacy group known by its Spanish acronym FIEL. “People hear from us and say, ‘Well, you guys are going to tell us that to keep us calm.’ When they hear it from an official, they say, ‘OK, now we believe it.'”

Some were unnerved, at least initially, when the Border Patrol brought boats from stations on the Rio Grande to help in the Houston rescue effort.

An Associated Press photographer who joined three uniformed Border Patrol agents and two Houston police officers on a flat-bottom boat on Wednesday got no takers as they navigated receding waters and passed a commercial area that had store signs in Spanish. People there politely waved off the agents.

John Morris, the Border Patrol’s chief of staff in South Texas, said the agency had 35 boats in the city’s flooded neighborhoods on Thursday and had rescued about 450 people since Monday.

“The agents and the assets that are here in Houston as part of the recovery effort are absolutely 100 percent only here for rescue and safety,” Morris said. “There is no enforcement activity being undertaken while we’re doing this safety mission.”

Immigration and Customs Enforcement, which has dispatched about 200 employees for search and rescue, also said it was “not conducting immigration enforcement operations in the affected area.”

Groups like FIEL have made it their mission to help immigrants who are fearful of immigration authorities. Its staff has been working around the clock since last week in its office on the second floor of a two-story building in immigrant-heavy southwest Houston, and has dispatched outreach workers like Cisneros, who has also counseled immigrants following Hurricanes Katrina in 2005 and Ike in 2008.

After driving on a near-empty freeway to the convention center, Cisneros found 35-year-old Adabella Fonseca resting on a cot with her 10-month old daughter while her husband was out inspecting damage to their trailer home. She fled Saturday when the water reached her chest; her husband stayed until it was neck-deep.

Fonseca, whose parents brought her to the U.S. from Mexico when she was a year old, said she had wanted to avoid the convention center because she feared immigration authorities. Now she was scared to leave.

Cisneros clasped her hand, told her not to be afraid, and promised support. Before leaving, he asked how she felt.