‘In Time’ is time well spent

“In Time” thrills and chills audiences with a visually stunning and heart-pounding 109 minutes of pure adrenaline rush. Writer-Director Andrew Niccol weaves in elements of such timeless tales as Robin Hood and Bonnie and Clyde, in a false-Utopian world where the expression “time is money” has become the law of the land. 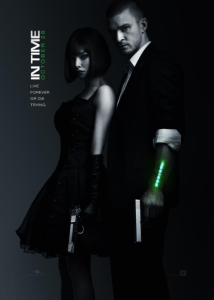 Niccol’s anti-materialistic message is the focal point of the story, though he’s delivered it in such an entertaining way you almost forget that the world you see in the film isn’t the real one you’ll be traveling back to as you leave the seats of the theatre with an uncontrollable excitement written all over your face.

Justin Timberlake stars in the lead role of Will Salas, a man born in a poor “time zone” who is forced to hustle his way through the seedy streets to earn more time on his biological clock, which, thanks to genetic engineering, literally ticks away on his forearm after the age of 25, when everyone stops aging. Through a stroke of random luck, Salas earns enough time to move out of the slums and into the wealthy time zone of New Greenwich with his mother, played by the beautiful and intriguing Olivia Wilde.

His sudden rise to the status of a wealthy man leads to an intense cat and mouse chase that provides the action and the suspense of the film. The audience is at the edge of its seat, never quite knowing whether Salas and his newfound love interest and fellow fugitive, Sylvia Weis, played by the enchanting Amanda Seyfried, will be captured or killed.

Timberlake is impressive, and carries the load of the movie with a sophistication not shown since his role as Sean Parker in the Social Network. Audiences everywhere may forget about his ‘N Sync past as Timberlake shows a great range of acting skills, from a tear-invoking scene, to well-timed and believable, yet impressive action sequences, to a witty and suave sophistication like an American James Bond.

Though a relatively small role, Olivia Wilde’s portrayal of Will Salas’ mother, Rachel, is a crucial one in developing Will’s motivation and personality characteristics, and even helps substantiate Timberlake’s character as the protagonist.

Wilde stuns the audience with a highly emotional sequence that follows her character as she is turned away from a bus for not being able to pay the price of two hours for her bus fare, to her dramatic and desperate sprint for survival during the film’s first quarter.

Amanda Seyfried steals the hearts of any male member of the audience with an incredibly deep and subtle portrayal of Sylvia Weis, a daughter of one of the world’s wealthiest men. Disenchanted by the lifestyle of someone who can live forever so long as she lives under her father’s overbearing thumb, Sylvia is immediately intrigued by Will Salas, who stands up to her father during a game of poker, and represents everything the wealthy time zone despises. There’s an innocence about her, yet also a mature and powerful element that makes her easily one of the most fleshed-out character of the film. Seyfried manages to pirouette along the line of sweet, smart and sexy.

Yet these amazing performances might actually be overshadowed by the beautiful visuals. The glittering skyscrapers and wonderfully paved, wide-lane streets of New Greenwich are gorgeous and the stark contrast of the poor time zones’ ghettoes help promote Niccol’s anti-materialism message. The casino and penthouse suites of New Greenwich are gaudy and opulent, while the hotel hideouts of the poorer ghettos are small and simple.

Niccol can count “In Time” as yet another successful addition to his filmography, which includes “The Truman Show,” “Lord of War,” and “The Terminal.” Fans of near futuristic, false-Utopian visions such as “V for Vendetta” and “The Island” will love “In Time.”

It makes you question whether everyday goods like coffee are truly worth the time it costs society to pay for them in a fast-paced, fun, and heart-pounding tale of fighting the system. I give it a 9 out of 10.