Inside Look on the Elite 8 Tournament – Day 1 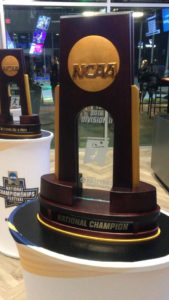 My alarm went off this morning at 6:20 a.m. but this time I wasn’t tired. I jumped out of my bed incredibly excited. We were off to Pittsburgh to play Elite 8, the NCAA national tournament!

I just couldn’t believe it. I immediately thought about the beginning of the season when everything was uncertain. I can proudly say that I’ve always been a believer and supporter of this team. We’ve lost two All-Americans, but we’ve shown so much heart. What has brought this team to Pittsburgh, for the first time in the program history, is a rare combination of hard work, faith, and most importantly humility. This group is different than any other I’ve experienced because every single player is coachable and accepts her role on the team. In fact, the postseason team’s motto is “we not me,” and it’s written all over the locker room.

We met at 7 a.m. at the baseball field to get on the bus to DFW airport. The whole cheer team was there to send us off, and many other familiar faces started to show up; coach Williams, our amazing strength coach, some of the plowboys, and many other friends. They all were holding signs and spreading good energy around. I don’t know how we’ve gotten so lucky to have the best supporters behind us. During the bus ride to the airport I’ve experienced a cocktail of emotions. This is my last weekend of college volleyball ever. It hasn’t hit me yet, so I don’t really know to feel about it. What I do know, is that playing this championship is the best way to end such a wonderful journey.

At our arrival in Pittsburgh airport, the shuttle welcomed all the passengers to the Division II Fall Festival championship. It caught us off-guard so we were very excited. It made us realize how big this event is and how far we’ve come.

I have to mention that Pittsburgh reminded me of Europe. Maybe because even though it was snowing many people were walking up the streets. The streets are also narrower than usual for a big city and the construction looks older and classic. My favorite thing of Pittsburgh so far, is the river; it divides the city in two sides.

Well, actually, my absolutely favorite part of Pittsburgh is the Omni, our hotel. It’s huge, elegant, beautiful, and…full of Christmas decorations. (Irrelevant fact: I love Christmas). All the teams are in the same hotel which has like 20 floors and the most luminous and beautiful living room I’ve seen in a long time. The hotel is full of NCAA Fall Festival signs and in all the TV screens they are constantly retransmitting NCAA Div. II Championship related content.

After the checked in, we met at the lobby, and went 25 minutes down the road to Pittsburgh Top Golf where the opening ceremony took place. We got there in a bus escorted by the police. I felt like a celebrity. 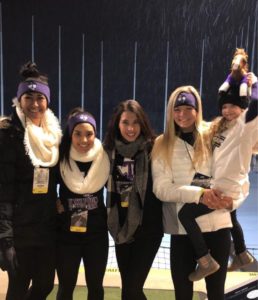 Once we got there we met Amelia, our Make a Wish assigned kid. For those who don’t know, Make a Wish is an association that helps ill kids by making their dreams come true. Amelia was very sick and had to have a liver transplant; but now she’s doing better. She has a lovely personality and was very happy to share the night with us (so were we). We ate great food, had a good time hitting some balls and watching some fireworks. Amelia made me think of Abby.

Abby is a sweet kid who’s now joining the volleyball team thanks to Make a Wish. She loves volleyball as much as we do and has one of the most beautiful souls I’ve found in my entire life. In her first encounters with the team she was very shy but now she’s very comfortable around us. She has come to most of our home games with her mom. The last time I saw Abby was two weeks ago, in the final of the South-Central Region Championship at home. After the game, Abby came up to me. Her eyes were shining, and she couldn’t stop smiling. She told me “Blanca, we won.” It was the happiest I’ve ever seen Abby since I’ve known her.

Most of the athletes are not aware of how they impact people’s lives. Throughout the game, we share emotions with others, and not only with our teammates, but with everyone who believes in us. Sports create unity among people and just in this unity, true happiness can happen.

Thank you to Abby and to everyone who has strengthened my love for volleyball by sharing it with me.