“Jurassic World” takes the world one ticket at a time

In the 22 years since the original “Jurassic Park” film released in 1993, the gates have finally opened to the public as Universal Studio’s “Jurassic World” premiered Friday, June 12. Reported from Box Office Mojo, an online box office reporting service owned by IMDB, the film grossed $208.8 million at the box office with the largest domestic and international opening weekend of all time. The park did not disappoint. “Jurassic World” took the world with its international opening weekend, earning an estimate of $315.6 million.

The film follows a similar plot to the previous three films. The Jurassic World amusement park is a Jurassic zoo featuring dinosaurs scientists have brought back from extinction and located on a set of secluded islands. In the film, events from “Jurassic Park” are now known as a horrifying incident, and the park has been rebuilt as Jurassic World. The rebuilt park now has a new owner and operates with futuristic technology. 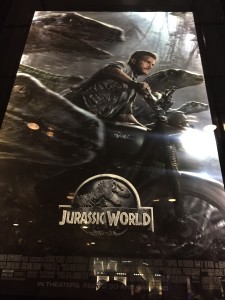 Guests of the park can view and enjoy dinosaurs through a variety of new attractions, such as the gyrosphere, where guest can ride in sphere-like vehicles to view dinosaurs up close and personal. Guests can visit the Gentle Giant Petting Zoo, which allows children to feed and ride baby dinosaurs.

The audience may experience flashbacks to the Tyrannosaurus Rex goat-feeding scene from “Jurassic Park” after seeing the new spotlight feeding show in “Jurassic World.” As seen in the popular movie trailer, one of the Jurassic World main attractions is a Mosasaurus, a large whale-like dinosaur, whose diet includes Great White sharks.

The film starts by introducing two of the primary characters, Gray and his older teenage brother Zach, who are preparing to leave for a short vacation at Jurassic World. The boys’ Aunt Claire, portrayed by Bryce Dallas Howard, is an uptight genius whose only focus is her scientific work at Jurassic World. With a demand to keep guest attraction at the park, Claire creates a new dinosaur. Simon Masrani, Claire’s boss and the new park owner, wants outside opinion of the new hybrid dinosaur and asks Claire to consult raptor trainer Owen, played by Chris Pratt.

Though Universal doesn’t accurately portray the Velociraptor, as National Geographic reports that paleontologist have found raptors to have been covered in feathers, the audience can’t help but fall in love with the “Raptor Squad”. Raptor Squad includes Owen and his four Velociraptor subordinates Delta, Echo, Charlie, and crowd-favorite Blue.

If you have seen any of the “Jurassic World” trailers, you are aware that the newly-created dinosaur escapes and causes havoc within the park. While the escaped creature runs rampage, another threat arises in the park—as in previous Jurassic movies. A group tries to steal the park’s research for its own personal use. It is up to Raptor Squad and Claire to save her nephews, stop the escaped dinosaur, and save the park.

As a summer blockbuster, Jurassic World ticks as many boxes as it needs to be considered an exciting, fun flick. You’ll probably want to see the movie on the big screen to get the very best experience possible. However, if you’d prefer to watch it in the comfort of your own home, you could have a look at some Cinema Room installers who can give you the movie theatre experience without the travelling, cost or annoying kids. The film reaches a wide range of audience members, including introducing a new world to children who are first experiencing the park while also living up to expectations for fans of the first “Jurassic Park.” The movie leans towards the sci-fi realm with all its dino-on-dino action. In fact, the film gives you more dino than you could ask for and will leave you wanting more, and you’re in luck. E online report talks of a sequel being up in the air, and Pratt himself in an interview with Entertainment Weekly has joked, “They have me for 38 movies or something.”

I give “Jurassic World” two raptor claws up.