FALL RIVER, Mass. (AP) — The fate of former New England Patriots player Aaron Hernandez is now in the hands of a jury, which began its first full day of deliberations Wednesday in his murder trial. 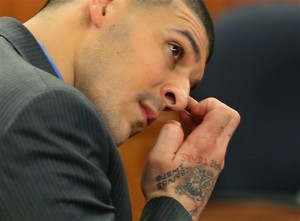 Hernandez is charged with the June 2013 shooting death of Odin Lloyd, who was dating his fiancee’s sister. Lloyd was shot six times in an industrial park less than a mile from Hernandez’s home. At the time, the star tight end had a $40 million contract with the Patriots.

Twelve jurors returned to deliberate Wednesday morning after getting the case Tuesday afternoon. Hernandez was briefly brought into court during the morning proceeding at the Fall River Justice Center. He is being held in a cell at the courthouse to await word on a verdict.

Later, he returned to court briefly while lawyers and the judge hashed out disagreements over certain exhibits before they were given to jurors.

The judge overruled the defense’s request to block a picture of the redacted final text messages Lloyd sent to his sister. In the messages, Lloyd tells his sister he is with “NFL.” He was dead within minutes of sending his final message.

Previously, the judge said the jury would not be allowed to see the content of the texts, but she did allow the timestamps.

Deliberations begin at 9 a.m. and go until 4:30 p.m., or later if jurors wish. They must come to a unanimous decision and are considering three charges: murder, illegal possession of a firearm and illegal possession of ammunition. The murder charge carries a sentence of life in prison without the possibility of parole if he is found guilty of 1st-degree murder, or life in prison with the possibility of parole after 15 years if he is found guilty of 2nd-degree murder.

His lawyer acknowledged for the first time Tuesday that Hernandez was there when Lloyd was killed. But he described him as a 23-year-old kid who did not know what to do. He pinned the killing on two of Hernandez’s friends, co-defendants Ernest Wallace and Carlos Ortiz. Both men have pleaded not guilty and will be tried later.

Prosecutors say Hernandez planned the crime, drove Lloyd to a secluded area, killed him, and then tried to cover it up.