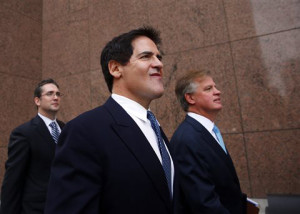 Dallas Mavericks owner Mark Cuban walks into the Earle Cabell Federal Courthouse for closing arguments with his lawyers, Tuesday, Oct. 15, 2013 in Dallas. The Securities and Exchange Commission is suing Cuban, saying he sold his shares in search engine company Mamma.com after learning privately about a stock offering that would lower the value of the shares. The SEC says Cuban avoided $750,000 in losses. Cuban disputes the SEC’s claim that he agreed to keep information about the 2004 stock offering confidential. He also says other investors knew about the offer, and that he did nothing wrong by selling his shares for $7.9 million.
(AP Photo/The Dallas Morning News, Tom Fox)

The Securities and Exchange Commission accuses Cuban of using inside information to dump millions of dollars’ worth of stock. On Tuesday, a government lawyer said Cuban had an unfair advantage when he dumped $7.9 million in shares of an Internet company.

One of Cuban’s lawyers argued that the government was twisting evidence and its case depended on an unreliable witness who did not testify in person.

The dispute concerns Cuban’s actions in 2004 regarding Mamma.com Inc., a Canadian Internet search engine. The company’s CEO had told Cuban about a pending stock deal.

Cuban had testified that he never agreed to keep information about the stock deal private.