Justice placed on administrative leave before resignation: Commended by faculty, students during service

Former Tarleton political science professor Dr. Jeff Justice was placed on administrative leave on May 29, 2015, just 12 days before his abrupt resignation, according to Justice’s personnel file obtained through open records by Texan News.

The resignation of the award-winning professor followed a May 18, 2015 Tarleton police report. In the report, an unnamed former student said Justice invited students to his home and had them watch him participate in a “Sundance ritual” in which he pierced his pectorals and hung from a tree in the presence of students. The report also stated he broke the law by “offering alcohol to underage students.” Read the full police report here.

The May 29, 2015 memo from Provost and Executive Vice President of Academic Affairs Karen Murray informed Justice he was being placed on administrative leave but did not give a specific reason why. 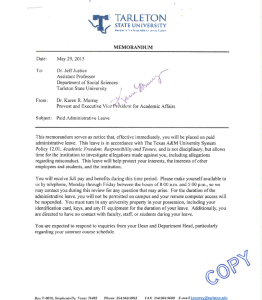 The memo stated that the leave was “not disciplinary, but allows time for the institution to investigate allegations made against you, including allegations regarding misconduct. This leave will help protect your interests, the interests of other employees and students, and the institution.”

Conditions of leave included expectations for Justice to be available for questions regarding the investigation, to return any university equipment in his possession and to not be in contact with any faculty, staff or students. He was also informed he would not be permitted onto campus during the leave.

The memo cited Texas A&M University System policies and regulations 12.01, “Academic Freedom, Responsibility and Tenure,”which states faculty may be placed on administrative leave “pending an investigation into matters pertaining to the faculty member’s job performance, including but not limited to, fiscal matters and improper conduct in teaching, research, or service.”

TAMUS Vice Chancellor for Marketing and Communications Terry McDevitt said in an email to Texan News that citing “allegations of misconduct” as the reason for the leave was in line with TAMUS policy. Prohibiting access to campus was also following policy in that because “In this case, access was deemed not appropriate.”

Texan News contacted Murray and Tarleton Public Relations Manager Cecilia Jacobs for comment. The requests were forwarded by both to Assistant Vice President of Marketing & Communications Harry Battson, who said only, “The university has no additional comment.”

Justice previously commented on his resignation in a statement to Texan News. Read the full statement here. When contacted for this story, Texan News was referred to Justice’s lawyer, Brady Pendleton. Pendleton requested by email that further questions be directed to him, and had no further comment for this story.

Days before his resignation, Justice was set to leave for a study abroad trip with students to Scotland. The class began on June 1, and they planned to leave the country on June 5, according to a student in the class who wished to remain anonymous.

The student said that Justice taught class on Monday morning, June 1, in Stephenville. The terms of his leave stated that he was prohibited from being on campus or contacting students. When the class met on Tuesday, June 2, students were informed that Justice would not be returning to the class or attending the trip with them, the student said.

Justice began teaching at Tarleton in fall 2009 and earned respect from his fellow educators, according to reviews by his supervisors in his Tarleton personnel file.

“No one in the department works harder than Jeff. We would not be able to do many of the things we do without his spirit of volunteering and self-sacrifice,” wrote former head of the Department of Social Sciences Dr. Chris Guthrie in a 2014 faculty performance review of Justice.

Just a few years after beginning a teaching career at Tarleton, Justice became a strong candidate for tenure, which is a permanent job contract in higher education and reserved for a university’s strongest educators. 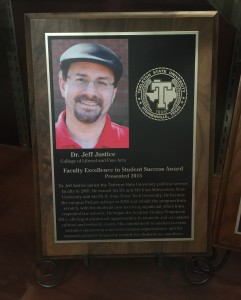 “Given his drive, initiative, work ethic, and overall quality and quantity of work, he is the strongest candidate for tenure I’ve ever seen,” wrote another former head of the Department of Social Sciences Dr. Malcolm Cross in Justice’s 2013 review.

Justice was commended for his research work as well as his work inside the classroom and received the Faculty Excellence in Student Success Award in 2015.

“Dr. Justice is well-regarded by his students as one of the most knowledgeable, dynamic, rigorous, and thorough professors,” wrote Cross in the 2013 review.

Cross was contacted by Texan News for comment but did not respond before publication. Guthrie passed away in late 2014.

Students also spoke highly of Justice on RateMyProfessor.com, giving him an overall rating of 3.5 out of 5 and often commenting on his passion for teaching.

“Dr. Justice is an amazing professor. It is clear from the beginning that he really loves what he is teaching, and his lectures are attention-grabbers. I never found government interesting, but with him I found myself eager to learn,” one student wrote on the site in January 2015.

Following his resignation and the release of the police report, Brandon Butler, one of Justice’s former students, told Texan News about his positive relationship with Justice as a professor and supporter.

“Of the entire faculty at Tarleton, I can easily say that he is one of the biggest supporters of athletics. He can be seen at almost every home basketball, football, volleyball, and baseball game, as well as any other pep-rally or school sanctioned event. He did this because of his love for the university and his students,” Butler said in a Facebook message to a Texan News reporter.

He also said that Justice had spoken with him about the “Sundance ritual” before.

“I have never participated in this ritual, nor has Dr. Justice ever pressured me into doing so. He merely educated me and a mutual friend of ours who has similar Indian heritage, on the subject,” Butler said. “When we got on the subject of the ritual it seemed a little weird to me, but the more he educated us on it, the more I could understand where he was coming from. Different religions have many different ways of expressing their spiritualism and who are we to judge how it’s done.”

Butler also said that he drank Scotch with Justice at his home, but Justice did not allow him to drink there until after he was 21 “for obvious reasons.” 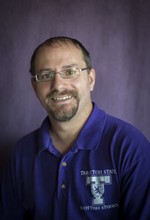 In 2009, the year he was hired, Justice’s résumé stated that he had given 10 conference presentations since 2001 and had authored or co-authored four publications.

Justice also had at least a working knowledge of 10 languages, according to the résumé.

Justice received his undergraduate and postgraduate degrees from Midwestern State University and his doctorate at Texas Tech University.