With the announcement of the long awaited “Fallout 4” over the weekend at the Electronic Entertainment Expo, better known as E3, fans of the franchise were surprised with more than just the game’s release date.

Todd Howard, video game director of Bethesda, the company that created the “Fallout” franchise revealed they had been working exclusively with Apple to release a new game called “Fallout Shelter”. The game’s release date was even more of a shock when Howard announced it would be available in the App store on Sunday, June 14. 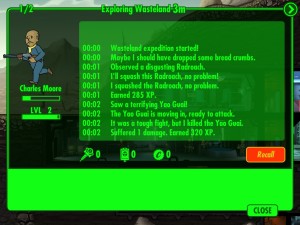 The goal of the game is to create a vault and thrive—or perish. You play as the Overseer or leader of a vault, helping Dwellers, the people who live in the vault, maintain much needed resources such as water, electricity, and food, increasing vault population, expanding the vault, and keeping Dwellers safe and happy. You must pay attention to your resources or your Dwellers face different consequences, such as radiation poisoning if your water drops, lower productivity and health with a low food source. And if the electricity drops, rooms lose power and your dwellers cannot work. If you are in need of resources, there is a feature in which you can rush a certain room to get the resources you need. If you rush a room, there will be an incident percentage from one to one hundred. If the incident percentage is high and you decide to rush the room, the rush could fail and result in either a fire or giant cockroach infestation.

Throughout the game, Dwellers can participate in certain activities that earn bottle caps, the currency in Fallout. You can use caps to buy and upgrade rooms. Various activities including leveling up a Dweller, completing objectives such as “Collect two hundred water”, exploring the Wasteland, and Lunchboxes provide you with caps. 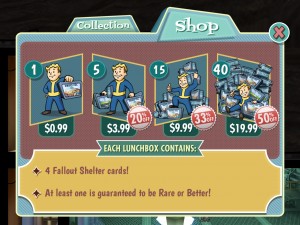 As Overseer, you can also send Dwellers out into the Wasteland to find caps and special equipment. Exploring the Wasteland, the outside world that has been destroyed by nuclear weapons and riddled with monsters and raiders, is as easy as dragging a Dweller outside of the vault. Once a Dweller has been exploring for a while, you can check to see what they have been doing in their progress log while out in the Wasteland. The progress log shows what your Dweller has encountered and collected, whether it is raiders, cockroaches, caps, or other people in need.

To add to the vault, you must unlock rooms, which is directly affected by the number of Dwellers. For example, to unlock the Medbay room, where 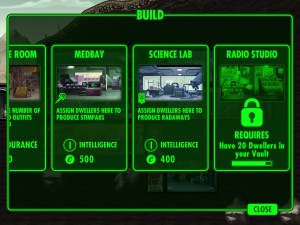 Dwellers with a high intelligence can make stimpaks for healing your Dwellers, you need to have 12 Dwellers. Very rarely do people show up at the vault door, so one way to obtain more Dwellers is by reproduction. If a male and female Dweller are placed in a living quarters together, they will talk, dance, and eventually go behind a wall. Many green smiley faces appear on the screen, and once the two reappear, the woman will be pregnant. It takes about five hours for the woman to have the baby and another three for that child to reach adulthood. Pregnant women can be put to work and children roam the vault as they please but cannot be used as workers until they reach adulthood.

Overall this game is fun and addicting. In my opinion, the game was very well thought through, as well as visually appealing and a nice addition to the Fallout Franchise. If you have “Fallout 4” fever and can’t wait until November 10, this game will definitely tide you over.