No. 19 TexAnns Impress in Second Half for the Win

The TexAnns have improved their record to 15-3 on the season after beating the Lions of Texas A&M University-Commerce 76-64.

The TexAnns started the game on an 11-3 run but when Kiara Wright had to sit due to early foul trouble, the Lions made a run. The Lions were able to take a 33-32 lead into the locker room at halftime, but the TexAnns were far from done. 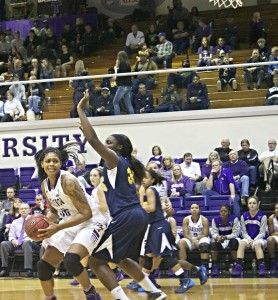 Kiara Wright had 15 points to put her at second most all-time for points in school history.
(Courtesy Photo by Azia Branson)

screens better. The team battled with the Lions for a good bit of the second half but finally saw the lead again with 16:38 remaining. Hearne credited some easy fast breaks and they started reversing the ball more in the triangle offense to go on a 16-1 run in the second half. By then, the TexAnns had an 11 point lead and neverlooked back.

Guard Brianna Bledsoe credited her game high 18 points to the other team’s defense focusing  on Wright. The TexAnns have

bounced back after dropping two in a row by winning two in a row but Bledsoe says the TexAnns still have plenty of work to do. The ladies shot 52.17% in the second half to help their percentage on the game ending at 45.8% on the night.

The TexAnns will be playing tomorrow afternoon in Denton against Texas Woman’s University. They will return home Wednesday night against Midwestern State at 6 p.m.