WASHINGTON (AP) — Backed by the National Rifle Association, the Senate’s No. 2 Republican leader is introducing legislation that would reward states for sending more information about residents with serious mental problems to the federal background check system for firearms purchasers.

The bill promoted Wednesday by Sen. John Cornyn, who has an A-plus rating from the NRA for his gun rights record, is far more modest than a 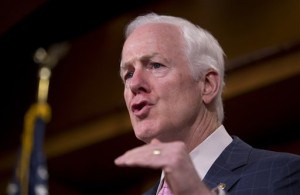 FILE – In this July 29, 2015 file photo, Senate Majority Whip John Cornyn of Texas speaks during a news conference on Capitol Hill in Washington. With the support of the National Rifle Association, Cornyn is introducing legislation to reward states that send more information about residents with serious mental problems to the federal background check system for firearms purchasers, the lawmaker said Wednesday.
(AP Photo/Manuel Balce Ceneta, File)

Still, the legislation represents a rare effort by a leading Republican to curb some firearms purchases. The NRA, a leading force for decades against gun restrictions, has backed some bills before limiting the ability of mentally troubled people to buy firearms.

Recent shootings have drawn attention to weaknesses in the background check system. The gunman in last month’s killings in a Louisiana movie theater had mental problems that went unreported to the federal database.

“Gaps in existing law or inadequate resources prevent our communities from taking proactive steps to prevent them from becoming violent,” Cornyn, R-Texas, said in a written statement.

Among those barred from buying guns are people legally determined to be “mentally defective” and those who have been committed to mental institutions. But states are not required to send those records to the background check system, which is run by the FBI, and its database is spotty.

Cornyn’s bill would increase grants under the government’s main law enforcement program by up to 5 percent for states that send the federal system at least 90 percent of their records on people with serious mental problems. States providing less data could see their grants from a broad range of justice programs penalized by the same amounts, at the attorney general’s discretion.

The provisions were described by aides to Cornyn who spoke on condition of anonymity because the legislation had not been broadly distributed.

The bill would give state and local governments more flexibility to use federal funds to screen for mental problems in prisoners and improve training for law enforcement officers and others on handling emergencies involving the mentally ill.

Less than two weeks ago, John Russell Houser fired a handgun into a crowd of movie watchers in Lafayette, Louisiana, killing two and wounding nine. Houser’s family said they knew he had mental problems and had sought court protection, but he was not involuntarily committed to a hospital.

When he purchased the weapon at a gun shop in Alabama, the background check let the sale occur. Police said Houser killed himself after they confronted him.

Dylann Roof, charged in June’s massacre of nine people at a historically black church in Charleston, South Carolina, bought his gun after an FBI background check examiner did not discover that Roof had been arrested for possessing illegal drugs, authorities said. That should have blocked his purchase.

On Monday, a Democratic leader, Sen. Chuck Schumer, D-N.Y., introduced legislation that would provide extra federal money to states that send a broad range of data on the mentally ill to the federal system, including information about the mentally ill, violent criminals and domestic abusers.

In 2013, the Senate shelved bipartisan legislation that would have expanded required background checks to firearms bought at gun shows and all Internet sales. All but four of the chamber’s 45 Republicans opposed the measure.