WASHINGTON (AP) — Moving to protect fragile marine life, President Barack Obama announced plans Tuesday to create the largest ocean preserve in the world by banning drilling, fishing and other activities in a massive stretch of the Pacific Ocean. 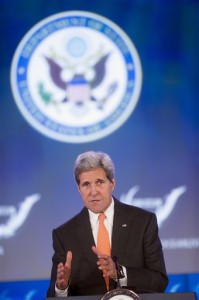 Secretary of State John Kerry addresses the second day of the State Department’s ‘Our Ocean’ conference at the State Department in Washington, Tuesday, June 17, 2014. President Barack Obama is looking to create the largest marine preserve in the world by protecting a massive stretch of the Pacific Ocean from drilling, fishing and other actions that could threaten wildlife, the White House said.
(AP Photo/Cliff Owen)

Carbon pollution is making the world’s oceans more acidic, pollution is threatening marine life and overfishing could wipe out entire species, Obama warned as he vowed to expand the sanctuary during an ocean conservation conference hosted by the State Department.

“If we ignore these problems, if we drain our oceans of their resources, we won’t just be squandering one of humanity’s greatest treasures,” Obama said in a recorded video message. “We’ll be cutting off one of the world’s major sources of food and economic growth, including for the United States. We cannot afford to let that happen.”

In a related environmental move, Obama vowed to take steps to curb the black market for fish and to combat fraud that hides the origin of seafood products.

Obama hasn’t settled on the final boundaries for the preserve. The White House said Obama planned to solicit input from fishermen, scientists, politicians, experts in conservation and others before the new protections take effect.

But conservation groups the potential reach could be massive.

Under maritime law, nations have exclusive economic control over waters that extends 200 nautical miles from its coast. Drawing on an geographic analysis of U.S. possessions in the region, the Pew Charitable Trusts determined that Obama could protect more than 780,000 square miles — almost nine times what Bush set aside when he created the monument. If Obama were to also protect the waters around the Northern Mariana Islands, the sanctuary could grow to roughly 1.5 million square miles, Pew said.

The executive steps, first reported by The Washington Post, come as Obama is searching for ways to leave his second-term mark on the environment despite opposition from many Republicans in Congress.

Presidents have authority to phase out commercial fishing and other activities from U.S. waters under the 1906 Antiquities Act, the same law that allows for land-based national monuments to be created by executive order.

Still, the moves could rankle some GOP lawmakers who say Obama is exceeding his authority by going around Congress to promote his agenda on issues like the environment, immigration and gay rights. Earlier this month Obama unveiled sweeping new pollution limits on U.S. power plants amid signs that Congress wouldn’t act soon to combat the heat-trapping gases blamed for global warming.

Obama also vowed to create a government program to combat black market fishing and seafood fraud, in which seafood products are mislabeled to hide their origin. The White House said 20 percent of the wild marine fish caught each year are part of the black market, at a cost of $23 billion to the legitimate fishing industry.

“President Obama’s announcement is a historic step forward in the fight against seafood fraud and illegal fishing worldwide,” said Beth Lowell of the conservation group Oceana. “This initiative is a practical solution to an ugly problem and will forever change the way we think about our seafood.”

The practical effect of the expanded marine sanctuary could be modest. At present, very little commercial fishing is conducted in the waters Obama is seeking to protect, and there are no signs that drilling in the waters is imminent. But conservation groups said it was crucial to take proactive steps to prevent those activities going forward.

“Anywhere there are fish to be extracted or minerals or resources, these locations are under threat form commercial extraction,” said Matt Rand, who runs Pew’s global ocean legacy project.

Obama, in his public comments, indicated the significance was partially symbolic. By taking the lead on ocean conservation, the U.S. can encourage the rest of the world to protect resources for future generations, he said.

“For this effort to succeed, it has to be bigger than any one country,” Obama said.