Tarleton is home of a new fraternity chapter this semester. Phi Kappa Sigma, sometimes referred to as “Skullhouse” because of the skull and crossbones in their crest and coat of arms, has 28 members, three of which were newly added in recruitment in early February. 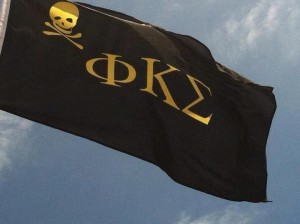 Chapters of Phi Kappa Sigma, or PKS, are already present at other Texas universities, such as Texas Tech, Texas Christian University, University of Texas at Austin, and University of North Texas.

Mark Logsdon, Tarleton’s national representative for PKS, says that Tarleton was chosen as the next location for a chapter because of “the extensive history, campus pride, recognition, and the vast amount of potential that the campus continues to exhibit.”

The process of establishing a new fraternity chapter is not an easy one, but it is very rewarding for those who have dedicated their time to reaching the goal. Last semester, 25 founding fathers banded together to make the idea of a PKS chapter at Tarleton become a reality.

Jordan Reeder, a student at TSU and one of the PKS founders, said, “The process of bringing this fraternity to Tarleton has done nothing but strengthen us as brothers. We are all going through this process together, learning from each other, and growing through these experiences together. There are always going to be situations that are going to be difficult, but as our motto “Stellis Aequus Durando​,” or ‘equal to the stars in endurance,’ suggests, Phi Kappa Sigma’s Men of Honor are not those

to back-down from the adversity that can challenge us.”

Phi Kappa Sigma hopes to maintain a positive attitude among its members and spread their optimism throughout the campus. They also strive to give students the chance to make a difference and better themselves.

Logsdon stated, “We simply want to bring an organization to campus that will stand-out in the crowd – one that allows men who are looking for a leadership position a chance to represent something bigger than themselves and to leave a lasting legacy on the Tarleton State University campus.”

PKS performs national philanthropy work with the Leukemia and Lymphoma Society and is still working to create a local philanthropy.