Routh confesses to Texas Ranger in video of interrogation

“I killed two men today,” Eddie Ray Routh said to Texas Ranger Danny Briley. “I knew if I didn’t take his soul, he would get mine.

Routh’s statement was captured on a camera placed in the interrogation room, where he was questioned on Feb. 2, 2013 late into the night. 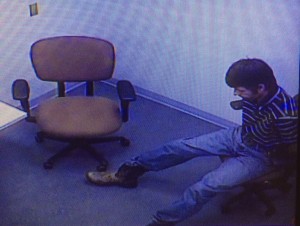 Routh sits in the interrogation room.

The interrogation video revealed what had happened that day, through Routh’s eyes.

“I got tons of people who are eating up my soul right now,” he said. “I wish the world wasn’t such a soulless place.”

Briley stated that Routh answered questions in a very “philosophical manner” several times. Then at other times he spoke strangely and said, “I can smell pig shit and bull shit.”

Ranger Briley questioned Routh about past drug use and Routh admitted that he had smoked “wet” marijuana that morning. “Wet” marijuana has formaldehyde in it, and a bong was found among Routh’s possessions at his house.

“Did you know what that marijuana was laced with?” asked Briley.

“It could have been formaldehyde,” said Routh.

In the video, Routh appears relaxed at times, sitting in a chair with his head resting on the table in front of him, and his eyes closed. Several times he asked if his handcuffs could be removed.

Routh didn’t at first notice the blood of the two men he shot on his boots as Briley interrogated him.

“Did you notice that there is blood on your boots?” asked Briley.

“Oh yeah, a little bit,” replied Routh, as he bent down to stare at his boots. 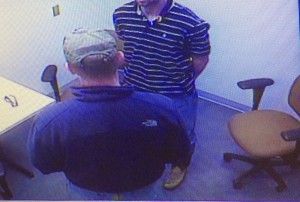 Routh told Briley he shot the men using a 9mm with an engraved anchor on it.

“You know what you did today is wrong, don’t you?” asked Briley in the video.

“I’m sorry for what I’ve done, and we can work this out. I am so sorry for what I have done and I wish I could have done it differently. I wish these handcuffs weren’t on me. I want to go to hell for this,” said Routh.

“What do you want me to tell your mom?” asked Briley.