The trial of the man accused of murdering “American Sniper” Chris Kyle and Chad Littlefield is expected to begin next week, and could take anywhere from two weeks to a month to complete. Two years to the day of the deaths of Kyle and Littlefield, Erath County District Clerk Wanda Pringle briefed reporters from around the world on the upcoming trial.

“The trial is expected to last approximately two weeks,” Pringle said, “although we have marked off the entire month for it. We are starting the jury selection process on Thursday (Feb. 5) and right now we’re looking at starting the trial on Wednesday (Feb. 11). That’s if everything goes according to plan and our jury can be chosen.”

A motion for continuance was filed by the defense on Monday, Feb. 2 and denied by Judge Cashon the following morning. The defense cited the movie “American Sniper” and the discussion it has caused in communities, including Erath, a recent bomb threat called in on Jan. 28, the cover of People Magazine with Kyle and his widow on the cover, and Gov. Greg Abbott’s declaration of “Chris Kyle Day” via social media as reasons for the need of a continuance. The trail is still set to begin with final jury selections on Feb. 9 and testimonies on Feb. 11. Cases such as this require a defense attorney to be present and present additional evidence and ‘facts’, whether that be a Florida criminal defense attorney or a Texan one, they all have to come prepared for anything that may occur.

Pringle said she sent out 800 jury summons and expects around 400 of those to show up for the selection process. Pringle said the 800 summons were generated by a computer program that uses a database of approximately 30,000 county residents. She said that about 40 percent of those summoned show up for selection. 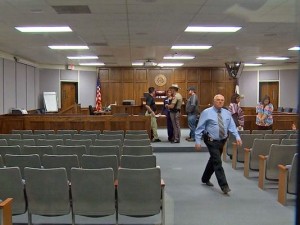 The Erath County District Court is still set to be the site of the Routh trial. Photo Courtesy of wfaa.com

There have been some questions if Routh can be tried fairly in Erath County because of the community’s close emotional ties to Kyle. On Friday afternoon, defense attorneys J. Warren. St. John and Tim Moore asked for a change of venue from District Judge Jason Cashon. The defense lawyer said “there has been extensive media coverage of the offense and considerable discussion has occurred in the community regarding the offense and the Defendant.”

Also included is a copy of the front page of the Stephenville Empire-Tribune with a story on Routh and an affidavit from Routh himself. In his affidavit, Routh claims there exists “a dangerous combination against the defendant instigated by influential persons such that I cannot receive a fair trial.”

He said there is “so great a prejudice against me that I cannot receive a fair and impartial trial,” and “that the amount of publicity generated as a result of the … case has been so great that it has produced so much prejudice in the community that the likelihood of being able to seat a fair and impartial jury” is “doubtful.”

Erath County District Attorney Alan Nash said the defense motion “is not ripe for consideration” as it does not meet the “statutory requirements set forth by Article 31.03(a) of the Texas Code of Criminal Procedure.” Article 31.03(a) states that a change of venue may be granted if the motion is supported by an affidavit by the defendant and “the affidavit of at least two credible persons, residents of the county where the prosecution is instituted.”

Prosecutors contend the defense failed to meet these requirements by failing to submit any affidavit other that Routh’s.

The defense also included affidavits from two Erath Country residents who believe Routh could receive a fair trial. Bobby Stidham and Susan Kay Culpepper have lived in the country for 35 and 18 years respectively, and each either work or have worked with the county in some capacity. The affidavits did not specify if the individuals were currently employed or retired, but listed Culpepper as a Chief Deputy Clerk and the Stidham as a Supervisions Officer. As of 5 p.m. Monday, the judge had not ruled on the change of venue motion.

Pringle does not believe that the trial will pose any security threat to any persons involved.

“We have been working on this for months and months. There will be a two block radius around the building from Long Street, up two blocks and over two blocks, that will be barricaded off 24/7 until this is over.” Graham Street will not be closed because of its importance as a major motorway, said Pringle.

The 113-seat courtroom will be open to the public but as Sgt. Sha King with the Stephenville Police Department said, the seats would be on a first come, first served basis. King also said that 21 of those seats are being reserved for family of Kyle, Routh and Littlefield.

The trial is expected to begin at 9 a.m. and run until at least 5 p.m., Pringle said. There will be three breaks throughout the day: one in the morning, one at lunch and one mid-afternoon.