The second half of the day’s trial began with Officer Flavio Salazar of the Lancaster Police Department returning to the stand.

They began by showing maps of Lancaster outlining the route of the car chase. Then, the court was shown the video from Salazar’s car camera.

As the video was shown, Eddie Ray Routh could be seen looking down and taking notes.

When the truck was stopped, there were approximately eight marked law enforcement vehicles on the scene and approximately ten officers on the scene. Routh cooperated with orders from officials to put his hands up and get on the ground.

Next to the stand was Michael Smith, Lancaster Police Department Lieutenant, who has served the department for nearly 20 years. His current position is in criminal investigation.

Smith explained that Detective Jesse Chevera, now retired, lives next door to Routh. Smith received a call from Chevera urging him to check the house to see if Routh’s dog is there.

Routh pulled up to the house while Smith and Chevera were there. Chevera recognized Routh and began to yell his name when he began to get out of the truck, causing him to shut the door and refuse to open it.

At this point, a sergeant arrives at the scene that was wearing a body camera, and the court was shown the footage. The window of the truck Routh was in was cracked to Chevera could speak to Routh, but was never rolled all the way down. Chevera was the only person Routh would talk to out of the law enforcement.

During Routh’s conversation with Chevera, Routh said the following: 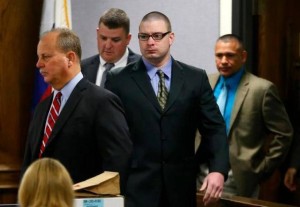 Former Marine Cpl. Eddie Ray Routh appears for the second day of his capital murder trial at the Erath County Donald R. Jones Justice Center in Stephenville on Thursday. He is led by defense attorney J. Warren St. John. Routh, 27, of Lancaster is charged with the 2013 deaths of former Navy SEAL Chris Kyle and his friend Chad Littlefield at a shooting range near Glen Rose, Texas.
TOM FOX / POOL

“He had taken souls, but he had more souls to take.”

“Everything is going so fast, I don’t know if I’m going insane.”

“I can feel everyone feeding on my soul, that feeling does not feel well.”

“None of my friends are in town anymore; my family is disappearing.”

“I just feel like everyone is beating on my soul, why is that?”

“Can’t drop the window, or else they [law enforcement] will win.”

During his talk with Chevera, Routh picks up a phone call.

He refuses to get out of the truck until his parents, who are in Abilene, get there. Routh then says he cannot trust Chevera because he is law enforcement and flees the scene, beginning the car chase.

Smith said that when law enforcement brouth Routh to a stop at the end of the chase they were unsure if Routh had weapons in the truck, but had to assume he did.

At this time, Routh calls a fifteen-minute recess. Afterward, Dr. Jeffrey Barnard is called to the stand. He has worked in Dallas County since 1991 and is the medical examiner that performed Chris Kyle and Chad Littlefield’s autopsies.

Barnard tells the court that Kyle died because of six gunshot wounds. He was healthy, with no drugs or alcohol in his body. At time of death, he was taking Venlafaxine, which is an antidepressant drug.

Barnard said seven gunshot wounds killed Littlefield. The shots in order were to the top of the head (he was not standing up straight when the bullet hit him, he had to be looking down at an angle), left side of the face, top of head, right shoulder, middle of the back, lower back, and left palm.

Barnard said that neither Kyle nor Littlefield had a chance of survival.

Earlier in the day, a Texas Ranger and a Lancaster police officer testified about the scene of the murders. Ranger Michael Adcock, who is stationed in Athens, Texas said the Rangers are called into investigate major crimes when local law enforcement needs assistance. Adcock said he received a call at his home to respond to two deaths that occurred at Rough Creek Lodge. He arrived at the scene between 10 and 11p.m.

“I found two male individuals with bullet wounds with multiple shells” and guns Adcock testified. He said that medical personnel had cleared the scene when he arrived. District Attorney Allen Nash showed Adcock numerous photographs of evidence from the scene, getting the Ranger to identify what was in each.

Adcock said the holstered handguns on both Chad Littlefield and Chris Kyle were the only loaded handguns at the crime scene. Other handguns found at the scene including a .45 caliber long colt handgun above Kyle’s head, were unloaded.

Prosecutors Thursday also introduced into evidence a receipt for $2.36, which they said documented Routh’s purchase of two bean burritos at a Taco Bell drive through on the Red Oak service road off I-35 sometime after 6 p.m.

The next witness called to the stand was Officer Flavio Salazar of the Lancaster Police Department. He stated that he was a retired Marine, who worked as a gunnery sergeant for 18 years.

Salazar said he and other officers on duty received a call that a truck matching the description of Kyle’s truck was found at 220 W Lancaster St. They were also told that the man inside the vehicle had been involved in a murder.

When he arrived, Salazar set up the perimeter around the truck. He said that the chief and a detective were trying to get Routh out of the truck. While they were talking to Routh, Salazar and another officer put “stop sticks” behind each wheel in case the suspect tried to drive off.

Routh, however, fled the scene. As police followed him, one officer rammed his vehicle into the side of truck but failed to disable it. Later the truck eventually became inoperable and came to a stop on I-35 north of I-20.

Adcock said he later made an inventory of the truck, Adcock stated that there were copious amounts of ammunition but no guns in the vehicle. They also asked if they had found gun cases or something that the guns could go into, which the Ranger said no. They also made a point to ask if there were any live rounds on the ground at the crime scene, and which the Ranger responded that there was maybe one. The defense also pointed out that it is possible that some of the rounds could have been from other shooters at different times.