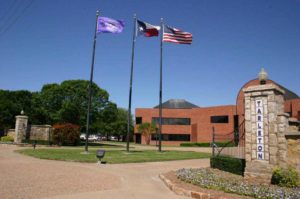 A false report about shots fired on campus was posted to Tarleton State University’s Facebook page Tuesday midday, and in minutes received more than 60 comments from users who tagged their friends or family to make sure they were safe.

A full six minutes passed before the univeristy posted another message, explaining the previous one was a drill and had been posted in error. The comments then turned from panic to anger. One Facebook user commented: “Next time u do a test tell us before u do it. I have 2 kids there. And I am 3 hrs away. not FUNNY. scared me.” More comments poured in by parents scolding the university for posting such events as a test. “That was in poor taste. You could have picked any other “test” to do other than a gun… for real… maybe tornado… anything!” said Kristy Stead.

Stephenville Police Department also took it seriously and an officer said that the department dispatched a patrol unit to investigate the incident before the university acknowledged the mistake.

“Officially, all I can tell you is they were doing some testing on Code Purple, and the message was sent out inadvertently,” said Police Chief Matt Welch. Welch explained Tarleton’s Risk Management is planning to host a mass casualty exercise on Sunday as a practice primarily for Tarleton nursing students. The Risk Management website states: “Disasters, whether manmade or natural, may occur in any location or at any time. Community disaster preparedness is critical to reducing loss of life and property. Nurses are key to preparedness and rapid response during disasters.”

Texan News telephoned the nursing department for comment, but the department referred questions to Tarleton police.

Welch said he received about a two dozen calls and texts in response to the accidental message.

“I was called by my vice president right away,” Welch said, “and she said she was in a meeting in the dining hall, second floor, and a student ran in, and said ‘There’s an active shooter’ and closed and locked the door.”

“That’s great, because it shows them doing the right thing,” Welch said. “They didn’t panic. They were calm about it.”

Welch said he then called his department to see if they had any information, and they didn’t. “That’s when I said, ‘OK, this is going to be false,’” said Welch.

Tarleton quickly apologized for the message. One post read: “This message was sent as an error. Our sincerest apologies.” A follow-up message said: “Previous message was a test. Sorry for the confusion.”

But many did not feel the drill was worth the panic it caused.

“Normally, when you have a test emergency broadcast, you start it with the words “This is a test of the emergency broadcast system,” or something to that effect.” said Facebook commenter Jason Gore. “Causing a mass panic is usually a bad idea. Just a little advice from someone that follows your page.”