More college students log onto Snapchat than ever before, and many are getting their news from the app’s news section rather than from traditional print news sites or television.

According to Snap Inc., the company behind the app, Snapchat had 161 million daily users as of the fourth quarter of 2016. Users visited 18 times a day, Snap said.

In comparison, Facebook reported it had 1.23 billion daily active users during the same time period.

Snapchat offers instant picture messaging, a look onto an individual’s day, and a news column letting users in on the latest trends and information. Snapchat story titles draw readers in with bright emojis next to them and enticing images.

College-aged people tend to gravitate to their mobile devices for everything. They scroll through their apps to find news about celebrities and on-going trends. Snapchat’s typical users are 18 to 34 years old, Snap revealed in data about its users and their behavior.

Some Snapchat users on the Tarleton campus said stories shared on the app include truth that has been stretched, deceptive titles and lots of topics related to celebrities.

Studies have concluded that Snapchat has transformed communication and has led to “journalism becoming attractive again,” according to the Higher Education Marketing Journal. 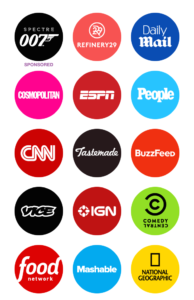 The Wall Street Journal, CNN and National Geographic are among two dozen media companies that joined the app “in homes of delivering journalistic content to this demographic,” the higher ed journal added.

“I never watch news on TV,” said Bailey Russell, a Tarleton business major. “I usually get my news about the Kardashians and such from Snapchat and Twitter.”

Tarleton education major Cheyenne Chabot also said she doesn’t watch TV for news. But she questioned some of the stories she sees on Snapchat.

“I try to go through Snapchat’s news area, but most of the time all of their stories are cringe-worthy,” Chabot explained. She added that the stories are “too annoying” and “way too targeted towards younger audiences and it is done completely overboard.”

While millennials often rely on digital outlets such as Snapchat for their news,  TV is taking a back seat.

Micah Phillips, who lives at Heritage Hall at Tarleton, said he watches regular TV about once a month. But “it’s never the news,” he said. “I don’t really care about news, and a lot of my friends don’t, either.”