Concerned about crime in your neighborhood? Check out Texan News’ new maps showing the location of hundreds of violent felonies reported in the 8-county Cross Timbers Region.

The maps document crimes reported to police in seven of the eight counties: Bosque, Comanche, Eastland, Erath, Hood, Palo Pinto, and Somervell in 2012.

The eighth county, Hamilton, is not mapped for 2012 because officials did not release the information when it was first requested last year. Hamilton officials earlier this month released information for 2012 and 2013 that will be mapped later this year.

Virtually every student enrolled in a journalism course during 2013 has his or her thumbprint on this project. Students submitted open records requests for crime reports from 2012 to law enforcement agencies across the Cross Timbers, worked with those agencies to get the reports in, and helped enter the data in those reports into spreadsheets. These spreadsheets of information have been mapped, and as a result, viewers can see where crime is going on in their county, in their town, even on their street.

In addition, those crime reports have been uploaded into DocumentCloud and linked to the maps. This means viewers can not only see what crimes are happening in their area, but they can also read the corresponding crime reports for themselves. 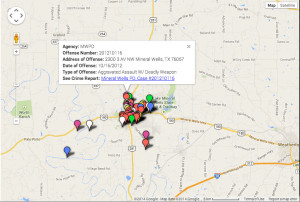 Crime reports are uploaded into DocumentCloud and linked to the corresponding crime in each map.
Texan News

The dots signifying where the crimes occurred are colored according to type of crime. For example, blue dots signify murders and red dots signify aggravated assaults. This makes it easier to see geographic trends and patterns. Click on the colored dot to read more about the crime and to find the link to the report in DocumentCloud.

Sexual assaults are not mapped as some of the cases tended to identify the victim. There were 80 crimes involving sexual assault in the Cross Timbers area in 2012, not including Hamilton County—six in Bosque, 11 in Comanche, seven in Eastland, 18 in Erath, 29 in Hood, six in Palo Pinto, and three in Somervell.

Otherwise, the reports are presented just as they were received from the law enforcement agencies.

This project is being duplicated for 2013. Students are collecting records that will be mapped later this year.

This project was one of eight across the nation that received funding from the Association for the Education of Journalism and Mass Communication (AEJMC).

To view each county’s map, click on the link below: