There are people at Tarleton State University that communicate via American Sign Language (ASL), but most go their entire academic career without meeting many other ASL-fluent students. Also, Tarleton State University only offers students the option of Spanish as their foreign language credit. Late last semester, Cory Crow – a senior communication studies major – and Rachel Peoples – a recent graduate – wanted to find a way to incorporate ASL onto the campus. They found themselves coordinating and molding an ASL Club.

According to research done by Gallaudet University, close to half a million people in the United States communicate using ASL, a language performed through hand signs and without voice.

Crow and Peoples have views of a club growing with students of all degrees of sign-knowledge, from beginner to skilled. Their goal is not to form a club full of deaf students, but one full of people who want to make special connections with others via this language.

“I’ve always thought it [ASL] was a really beautiful thing. I love that. Even though I don’t know very much, I can see how effective it is. If there was a club here, where there are deaf students, they would feel more comfortable. More people would learn, and it would be a really cool thing,” Peoples said.

Peoples mentioned that she would love to be able to start a gathering place for other students at Tarleton to find this same beauty in the language that she has found. 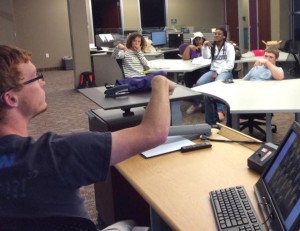 “I actually interviewed one of the deaf students here and asked if it would make her transition here [from her previous college] a lot easier. She said it would make it a more welcoming environment and be easier to make friends, because you would always be surrounded by people who either know it or are really eager to learn. That helps eliminate the language barrier,” Crow added.

According to the Disabilities Office, there are six students here that are registered as hearing impaired. There may only be six students registered, but Crow and Peoples both claim that they know hearing impaired students that are not registered with the Disabilities Office for personal reasons. Both stress that this is also a minor goal of the club – to help students know that there is a place on campus that can help if they ever feel that they need assistance or accommodations in class.

This is only one small goal for the ASL Club. Crow and Peoples have many big dreams for the forming group that lie ahead, and they imagine this club as one with open arms and flexible objectives.

“We have had an interest meeting [in the fall], and it made me really excited for this to take-off,” Crow said.

On Tuesday, Jan 20, Crow held the first meeting of the spring semester to try to organize a weekly meeting time.

“This semester, I’m going to try to see if we can get the club to be officially recognized by the university,” Crow added.

He also mentioned the ideas he has for the club this semester. “One thing we’re planning is a silent dinner. We could possibly go to the movies, because they have captioning at the theatre here. Another opportunity would be going to a “deaf night” somewhere in the Metroplex to be able to mingle with deaf people. The only problem is that, if we can’t get the club officially recognized by the university, we can’t get money [for funding].”

Crow and Peoples hope that, by evolution and eventual authorization of the TSU ASL Club, they can raise deaf awareness. They have even had thoughts of signing at large student body gatherings to show everyone that there are signing students at this university.

Crow stated, “In deaf culture, we love it when other people are trying to reach over that language barrier! We love it!”

Stay updated on the construction of this club by liking “TSU ASL Club” on Facebook.