Tarleton football moves up to No. 8 in the last AFCA Poll

Tarleton State University football continues their historic season climbing to No. 8 in the national ranking by the American Football Coaches Association (AFCA). The Texans remain unbeaten in the Lone Star Conference (6-0) after their Homecoming victory against Texas A&M-Kingsville (59-21).

“It was a great win against a good opponent,” Quarterback Ben Holmes said. In the game Senior Xavier Turner, scored four-consecutive touchdowns, tying a school record and earning his second straight LSC Offensive Player of the Week.

“We are changing how people think of Tarleton football,” defensive sophomore-player Money Martin said. The Texans are just one win away from securing the LSC Championship. 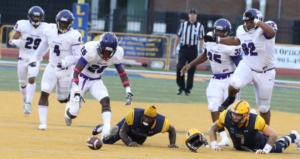 Tarleton State University football continues their historic season climbing to No. 8 in the national ranking by the American Football Coaches Association (AFCA).
Photo courtesy of tarletonsports.com

The Texans debuted at fifth in the first NCAA official ranking in Super Region 4, released on Monday. “I know how hard we work and it’s good to see that our efforts are paying off,” Martin commented.

The top seven teams in all four Super Regions will be competing for the Division II National Title. The first qualified of each Region will earn a first-round bye and the next three will host matches. MSU Texas, the next Conference opponent, was ranked No. 6.

For more information of the regional rankings, visit the NCAA official website.

The Texans will head to Wichita Falls, as they take over No. 10 Mustangs on Saturday at 7 p.m. “The rankings don’t mean anything to me personally, I don’t look into that stuff. Just focus on Midwestern State,” Holmes added. Holmes and the Texans will be looking for the 8th straight-win of the season..

More information is available at the Tarleton Athletics website.