This story has been updated to include the affidavit. 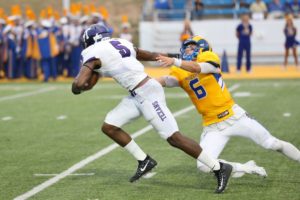 Speed is a linebacker for the Tarleton State University Texan football team.
Photo courtesy of tarletonsports.com.

His sophomore year, Speed led in forced fumbles with five, played in 11 games and registered 68 tackles, which was tied for third-most on the team. He also had 13 assisted tackles for a loss of yards, including six sacks. His junior year, he played in five games during an injury-plagued season, made 41 tackles, including 24 solo, and had one forced fumble and two fumbled recoveries. In the recent Texans v. Commerce game, Speed earned Defensive Player of the Week. He had 14 tackles, 2 tackles for losses, and 1 sack.

Off the field, records paint a different image of the 23-year-old from Fort Worth, TX. On the first week of class in late August, he and four others were arrested on charges of engaging in organized criminal activity. Speed was arrested on campus, briefly jailed, then released on bond, and he’s continued to play football.

The others arrested––Torrence Neal, 23, Brenning Brown, 25, David Freeman, 25, and Dmyrian Robinson, 23––arrested on the same charges.

According to an affidavit from Harris County District Clerk, Speed and four others were members of a gang known in Harris County as the Aviators. Police say they used identification they stole to create bogus credit card accounts, then used the cards to purchase cell phones delivered to the people whose identity they stole. The records did not explain why Speed, who attends Tarleton and lists a home address in Ft. Worth, was in Deer Park, in Harris County.

In one case, victim Phillip Rhule, a Pasadena police officer who lives in Deer Park, called the Deer Park Police to report that he was notified by LifeLock, an identity and theft protection company, that his identity had been used to open a line of credit that he did not authorize. On June 25, 2018, Rhule told police that FedEx delivered a package from Xfinity Mobile to his home containing two Samsung Galaxy S9 cell phones that he did not purchase. When the FedEx truck left, Rhule said a man rang his doorbell and said FedEx delivered his cell phones to Rhule by mistake and asked Rhule to turn the phones over. Rhule refused and called police and provided them with a description of the man, who identified himself to Rhule as Dmyrian Robinson.

Deer Park Officer C.W. Jackson later found Robinson walking down 13th Street. Records show that Robinson told police his car broke down and he had gone to Rhule’s home to pick up car parts but left when the man living at the home answered the door and started “freaking out.”

Police, however, weren’t buying his story. Officer N.C. Thatcher, who was familiar with the neighborhood, said in an affidavit that the distance between Robinson’s car and Rhule’s home is roughly two miles.

“It is unlikely a person would walk two miles into a residential neighborhood to get vehicle parts from a stranger when the route between the two locations included three automotive shops within one-tenth of a mile of the disabled vehicle,” Thatcher said.

Meanwhile, another Deer Park officer Mary Salas, found Robinson’s car, ran the plates, and learned that it was registered to a woman in Fort Worth. Inside the glove compartment, Salas said she also found a paper Texas ID Card that showed Robinson’s picture, but the name, address, and birthdate of another victim, Tyler Savoy.

Deer Park Police Sgt. J. Tryon said Savoy told him he did not know Robinson and said that he should not be in possession of his ID. Savoy also told Tryon he would like to press criminal charges against Robinson.

Tryon contacted Neal, who agreed to make a statement and to let police extract data from his cell phone. Documents show police found photographs of two paper Texas ID Cards with Neal’s pictures on them in his phone, but the names and addresses of victims Mervin Elmore and Brandon Connelly, who also had cell phones purchased under their names without authorization. Another Texas ID Card was found with Robinson’s picture, but the name, address and birthdate of victim Anbalagan Sivgnanam. All three victims told police they did not know Neal or Robinson and asked police to press criminal charges.
When Neal met with Tryon, he told him that he and Robinson were a part of a larger group – a gang called the Aviators -, that order cell phones with credit card numbers, names, and addresses they acquire online, according to the affidavit. Neal said he had only participated in this type of fraud “three or four times.” Robinson also said that he done so only “once or twice before.”

After Thatcher extracted data from Neal’s phone, he found a message sent to Robinson, Neal, and two others saved in the phone as “B” and “EJ,” from a person saved in the phone as “Supa” with Rhule’s address. Shortly after Robinson was arrested, the phone number for “Supa” sent a text message to Robinson asking, “Did you get them?” Through data extraction and public social media information, Thatcher identified “Supa” as David Freeman, “B” as Brenning Brown, and “EJ” to be Elbert Speed.

From Speed’s social media page, Thatcher found pictures of Speed in his Tarleton State football uniform. Thatcher researched the team’s roster online and said he was able to identify Speed from the roster. 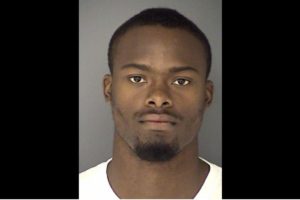 Thatcher said in the affidavit that he found several messages in the phone data among the five men in which they discussed activities involving fraud and cell phone theft. Thatcher also found 11 other potential victim’s names, addresses and FedEx tracking numbers associated with fraudulent cell phone purchases made by members of the group between May 1 and June 25.

Another message, according to Thatcher, was discovered between Neal and Speed, in which Speed told Neal that a person named Christian Apeku, from Ghana, Africa was going to send them some high dollar orders. In one message, Speed texted: “He gone send some big shirt on Sunday. That’s worth some bread.” Neal responded, “I’m talking bout some big some worth it like some $500+.”

Police identified Freeman as the leader of the group who gave instructions to the other members about who was to go to what address and what to collect, along with victim’s information and the FedEx tracking numbers.

Altogether, police said they believe the group purchased cell phones of at least $10,800 in the names of victims whose identities the group stole. 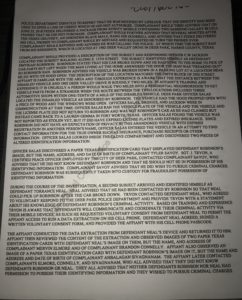 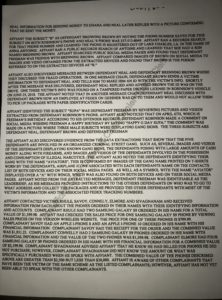 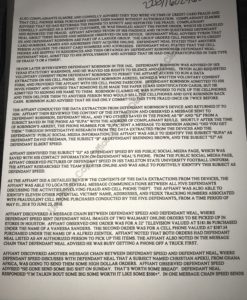 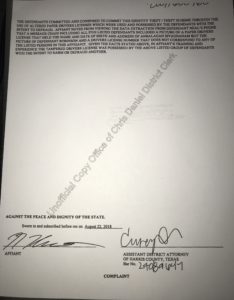 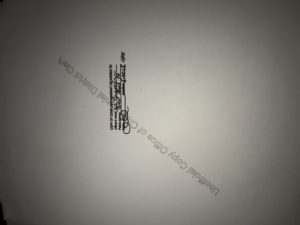 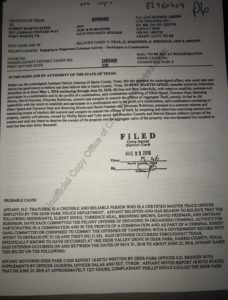 Photos of the affidavit.