Buckles and ribbons are won in the practice pen and picked up at the rodeos. Anyone who has been around the rodeo circuit knows how true that is and Tarleton State University has decided to recognize rodeo team members long after their last collegiate rodeo. 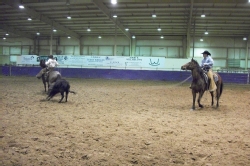 Dr. Dominic Dottavio recently approved seven nominees for this year’s induction class. The nominees will be notified by mail no later than Feb. 28, according to Assistant Rodeo Coach Tibba Smith. Though nominations closed Jan. 15,Smith said, “We are accepting any nominations of anybody that was significant with Tarleton.”

Tarleton has had a rodeo team since 1947, but only established a Hall of Fame last year. It is unclear why Tarleton’s Rodeo Hall of Fame has taken awhile to get established, but it is in full swing now. Its first year out of the chutes, eight past rodeo team members  were inducted, all from the 1969, 1970 and 1971 women’s team that won a National Championship three years in a row.

According to the Tarleton Rodeo Hall of Fame Steak and Auction Dinner’s program, the inaugural inductees are Angie Watts Averhoff, Vicki Higgins Emerson, Sally Preston, Hadley Reed, Karen Walls, Connie Wilkinson Wood, Martha Tompkins Wright, and Sharon Harrison Youngblood.  The inductees were recognized at the annual dinner held at City Hall in City Limits where the inductees were given medallions to be proudly worn around their necks.

Every year nominations are taken and nominees are decided on according to a list of recommendations by a committee of seven people. Qualifications can be found on the Tarleton rodeo web page. Members are inducted once a year and will be recognized at both the annual steak dinner and auction and the National Intercollegiate Rodeo Association Stampede Rodeo that will be held in April at the Lone Star Arena in Stephenville.

In the next five years, Smith says she thinks “it will grow every year, bringing alumni back to Tarleton. It’ll just keep growing and growing.”

Currently there is no place housing the hall of fame, but with an indoor area in play, Smith hopes there will soon be a place dedicated specifically to these honorable cowboys and cowgirls.