Tarleton searches for ‘visionary’ to take on police chief position

Tarleton’s search for a new police chief is in its preliminary stages and the university has begun looking for someone to meet the needs of a rapidly evolving university.

The former chief of police, Justin Williams, left Tarleton near the end of last semester to take on a position in Idaho as the chief of a municipality. 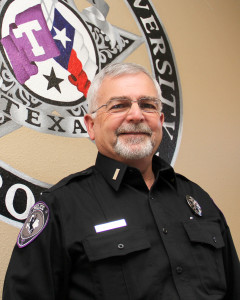 Towards the end of September, Tarleton hired Lieutenant Alvin Allcon as the interim chief until the position is permanently filled. The end of January marked Lt. Allcon’s 36th year working in law enforcement, more than 10 of which were spent at Texas Christian University.

Vice President of Student Life Rusty Jergins says that at this point, the search to fill the position is only in the beginning stages. He says the job application will be open for some time yet so as to attract as many viable candidates as possible.

“Through word of mouth, formal announcements on our university website and the links to where it is, as well as notifications to associations, the word is out that we are accepting applications,” which have already begun to come in, Jergins said.

There has yet to be a search committee appointed, but Jergins says that there will be after there has been ample time to for qualified applicants to enter.

“We feel like we’re in a good place as far as allowing the opportunity to get a good candidate pool,” Jergins said.

Through Allcon’s experience working with Tarleton so far, he says he has an idea of what type of police chief Tarleton needs to fit how fast the campus and student body is changing.

“There’s got to be somebody that needs to be more visionary,” he said. One that “can look at problems that Tarleton is facing as far as growth.”

Jergins agreed with Allcon’s idea of the need for a visionary and that “though it is not a required credential, someone with higher education experience” would be preferable, adding that state and city policing tends to be fairly different from what one sees in a university setting.

“We need a person that’s a leader, that stays current with law enforcement work in higher education, and that sees themselves as an educator,” said Jergins. The bottom line is finding someone who “will have the best interest of Tarleton and Tarleton’s students at the forefront.”

By the time students return for the fall 2014 semester, the new chief should be settled into his or her position at Tarleton.