On Saturday, April 8, four Tarleton students went to Waco to participate in the Texas Farm Bureau’s annual Collegiate Discussion Meet. 11 college students entered into the contest and Terren Moore, a senior, Agricultural Services and Development major from Tarleton State University walked away as the winner. The contest was a roundtable discussion with contestants discussing questions about the agriculture industry. 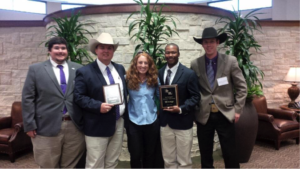 Moore spent a great deal of time preparing for the contest.

“I did a lot of research. There were some days I would be on the phone talking to farmers for hours. I visited the Farm Bureau office and talked to farmers in Texas and even other states. Lots of late night studying and preparing,” Moore said.

The contest is conducted in rounds. “[During] the first round, we pulled the questions that nobody wanted, but I knew I had to go in with confidence and lead the discussion. I’m glad we got it done. When we got out, I felt like I led the discussion and that felt good,” said Moore.

The finalists held a 25 minute conversation on the topic of how farmers and ranchers can maintain their buying power with the continued trend of input supplier and provider consolidations. They were judged based on their speaking skills, cooperative communications with the other contestants, and effective problem-solving.

Moore wasn’t nervous going into the final round.

“We were guaranteed $500 going into the final round so I was like ‘hey I’ll try my best. If I win, great and if not, it happens’. I was very prepared so I had no reason to be nervous. I just prayed that I did my best,” said Moore.

Regarding how it was like to win, Moore said he felt, “Humble. My help cometh from the Lord. Without him, I would not have the strength or wisdom to participate in these contests and farm. He is my rock. I can’t take the credit. I’m just letting the Lord use me.”

Every contestant that makes the finals gets $500 and the winner received $2000. As part of his win, he will get an expense-paid trip to represent Texas in the American Farm Bureau Federation’s Collegiate Discussion Meet in February 2018.

Moore is looking forward to going to the national competition.

“I am still preparing myself and educating myself on these issues. Things will change by next year with a lot of these topics such as trade, but I will be keeping up, continuing to talk to farmers, ranchers, and politicians.”