Fisher Rinderknecht, owner of the company Flight Reach Productions (FRP) and senior at Tarleton State University, came in first place at this year’s Entrepreneurs of Erath (EoErath) business plan contest. The top winners were announced at an award luncheon on Friday, April 21.

EoErath is a biennial contest that started in 2015 and is open to startup, existing businesses, and top business plans created by Tarleton students.

Rinderknecht says there are three parts to this contest, which started in January of 2017. According to Tarleton’s press release, the “competition consists of three rounds: the executive summary, formal business plan and a pitch before contest judges.” 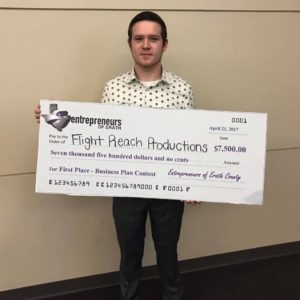 Rinderknecht is a senior at Tarleton majoring in Business Administration. Photo by Latricia Powell.

“The connections at Tarleton have been really great. I’ve utilized a few of my professors to help me organize a business plan for the competition and to give me a few ideas,” said Rinderknecht. “I’ve talked with a couple of the Agriculture professors here trying to get us information about what specifically they think would be useful,” he added.

“I poured my heart and soul into this so I had my fingers crossed, but I didn’t really expect to get first so it was definitely a pleasant surprise,” said Rinderknecht. “It was overwhelming to say the least,” he added. The top three winners will get to share services and cash prizes that amount to $55,000 to help their businesses.

Rinderknecht plans to use the award money to purchase a new drone, move from being a sole proprietorship to reorganizing as a LLC (Limited Liability Company), and investing more in getting the word out about his company.

Rinderknecht opened up Flight Reach Productions in November of 2016. This Stephenville-based company specializes in providing drone services to multiple industries and allowing them to integrate drones into their workflows. He is hoping to negotiate contracts with the top drone manufacturers so that he has access to the best technology out there, such as the Mavic Pro 2, to further build his reputation as a supreme quality supplier. He is the owner, creative director, and remote pilot. FRP currently has four different markets that they operate in: Construction, Real Estate, Agriculture, and Events.

“We’re really trying to get more agriculture and construction type work and hopefully we’re going to be starting to monitor all the construction for Tarleton,” he said.

Originally from Glen Rose, Texas, Rinderknecht came to Tarleton as a freshman and then went back home to attend community college. He returned in 2014 and will graduate this spring with a degree in Business Administration. Rinderknecht started to fly toy helicopters when he was around 10 years old and says he has always had an interest in aviation. He says his entrepreneur skills and spirit have been honed from his parents owning their own business. He definitely comes across as a student who has a good business head on his shoulders, he should take a negotiation course to hone his business-minded skills when his company gets off the ground, he’ll need it for all the deals he’ll be making! For now, it sounds like he is trying to grow his business from his home. This is extremely common for a lot of upcoming business owners. However, it can cause confidentiality problems for some people who might not feel comfortable giving their home address out to strangers online. If that’s the case for Rinderknecht, he could always consider looking at the services offered by Your Virtual Office London, for example. They help business owners gain a virtual address which makes them look more professional and also keeps their home address secure.

He has completed SUAS (Small Unmanned Aircraft System) operational and safety training and is certified as a remote pilot by the FAA (Federal Aviation Administration).

According to the FAA, Fisher Rinderknecht is one of the only two FAA 107 license operators in the entire Erath County. Rinderknecht says that if someone is not careful and properly trained, trying to just get out there and do aviation work could result in a $27,000 fine. There are a lot of rules and regulations that must be understood and followed, in order to operate the drones.

Flight Reach Productions has completed several projects around the area and although his work has taken FRP from Abilene to Fort Worth and even Austin, they would definitely like to do more locally. “We’d like to do more local work and work that would specifically impact Erath county,” said Rinderknecht.

Flight Reach Productions is also entered in two more entrepreneur business contests and on May 10, Rinderknecht will find out if he will progress further into the competitions. He is entered in the Texas Rural Challenge, and for the NSLS (National Society of Leadership and Success) Entrepreneur Award.

For business inquiries or more information about Flight Reach Productions, visit their website at www.flightreach.com or contact Fisher Rinderknecht at 254-592-4075 or fisher.rinderknecht@icloud.com