The TexAnns have added a new team camp to their schedule that will take place June 26 through the 28.

“We’ve had some interest in the last few years as far as teams and coaches asking for their teams to come,” TexAnn head coach, Misty Wilson said. “We decided, you know what we’ll replace one of our overnight camps and do a team camp to give all of these little small towns around here the opportunity to come to a team camp that is affordable and close.”

Each camper will receive a T-shirt and teams will play about nine games in the three-day span with trophies awarded at the end. The camp brochure states that the camp staff will consist of outstanding high school coaches, TexAnn assistant coaches, and current and former TexAnn basketball players. 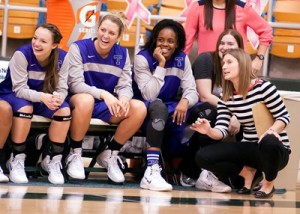 “We will do little sessions, because it depends on how many teams we have and how many games we have, but we will do little short skill sessions like instructions or maybe motivational speeches through out the camp during the day,” Wilson said.

The teams attending can bring a volunteer coach to the camp that will stay with the team in the residence hall and throughout the week. If the team cannot provide a volunteer coach a TexAnn player or coach will step in during the games.

“Usually the coaches and the teams that are coming their coach has an idea of what kind of offence they will want to run, they might want to run their offence they are planning to run throughout the season,” Wilson said, “So what ever coach they bring will coach them through that because they know that better than we do, we will give them pointers if they ask but most of them have an idea on how they want it.”

The camp will be open to high school and junior high girls’ basketball teams costing $1000 per team. Residence hall rooms and meals from the dinning hall will be available to purchase. A non-refundable $250 deposit per team will have to be made by June 23.

Other camps offered by the TexAnns include a day camp open to K through sixth grade and a fundamentals camp for students in grades four through 12. The registration forms, full schedules, and more information are on the Tarleton Athletics website.