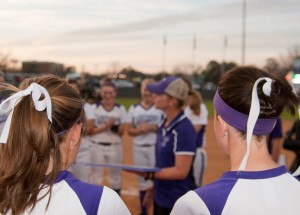 For the second straight year, the TexAnn softball team has started the season with a pair of victories. Opening at home for the first time since 2007, (2-0) Tarleton State scored 26 runs in the two contests and sent Southwestern Oklahoma State University home 0-2.

In the season opener, the TexAnns trailed 15-14 heading into the bottom of the seventh. Down to their last out, Melody Mayse singled up the middle to score Katelyn Conlee to knot the game at 15. Kady Crow hit a walk-off single, scoring Mayse from second to notch the TexAnns’ first win in dramatic fashion.

Game two featured a 4-4 performance by Mayse and a phenomenal effort on both sides by Conlee. Conlee went 3-3 from the plate with a double, six RBI and the first TexAnn round tripper of the year. She was also the winning pitcher, tossing four innings and striking-out two in the 11-8 victory.

Head Coach Julie Mata’s TexAnns were picked by coaches and members of the media to finish in sixth place in the conference. Mata is entering her 19th season with Tarleton State, and boasts an impressive 507-386-3 record. Last season the TexAnns finished with a 20-30 record but qualified for their 13th LSC Championship tournament in the program’s 19-year history.

The TexAnns had 56 games scheduled this season, and after Monday’s double-dip will travel to Commerce for the inaugural Texas A&M-Commerce Lion Classic. Tarleton State will play double headers on Feb. 6-7 starting at 10 a.m. both days against Southern Nazarene and Northeastern State.

The team will then return home for a third game against Northwestern Oklahoma State before heading to the West Texas A&M Woodward Invitational in Canyon from Feb. 13-15 where they will face some of the top teams in the region. The following weekend the TexAnns head south to San Antonio for the St. Mary’s Invitational and their last chance to tune-up before LSC play.

Tarleton State will have to be on the top of its game when the team returns home on Feb. 27-28 for the first conference series. Defending NCAA D-II National Champion West Texas A&M will travel to Stephenville to kick-off LSC play with a double header starting at 5 p.m. on Friday and 1 p.m. on Saturday. The TexAnns will alternate home and away four-game series throughout conference play, ending in Portales against the Zias of Eastern New Mexico University.